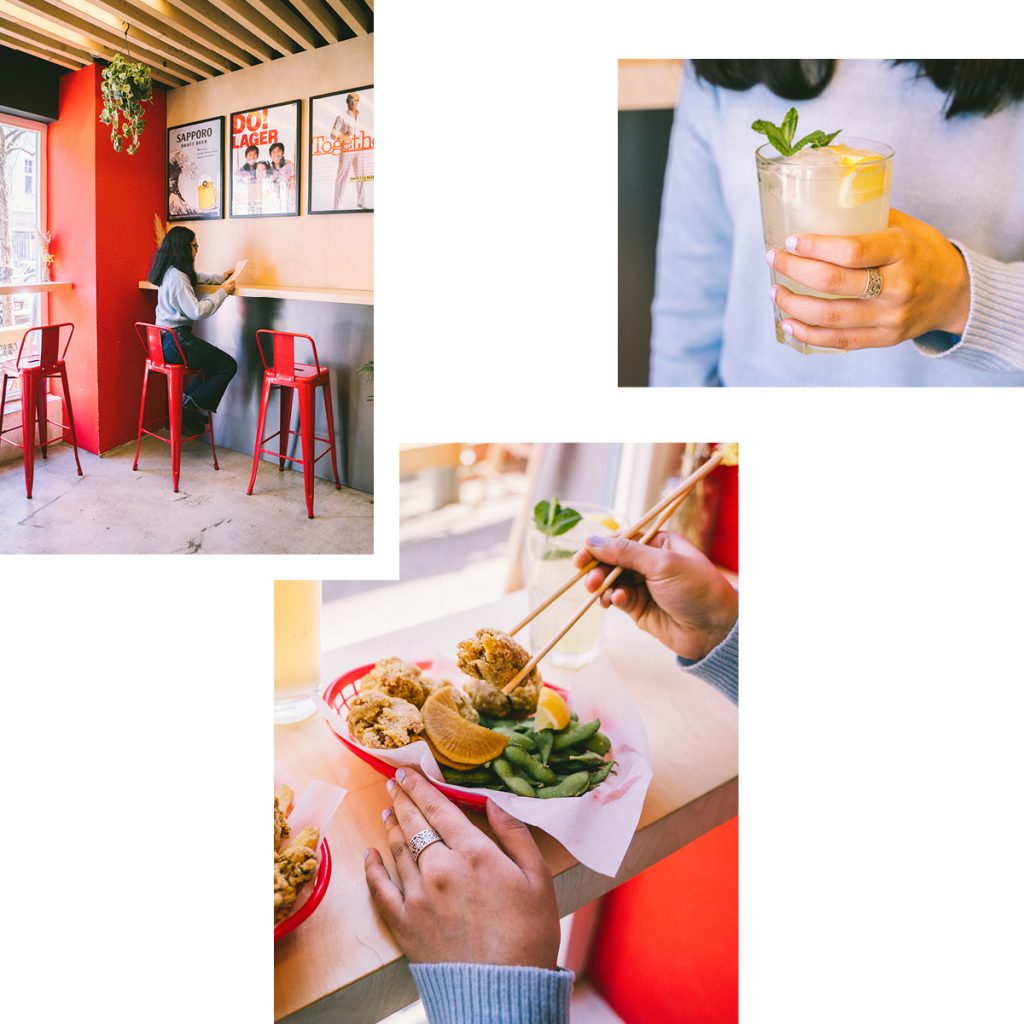 A hole-in-the-wall gem, Tsu Tsu specializes in classic Japanese karaage fried chicken (and its vegan equivalent) on lively-yet-leafy Graefestraße. Despite opening right in the middle of the pandemic, business has been going well for owner Kazu who, attracted by the city’s music, moved from Tokyo to Berlin. Although Berlin was new terrain, running a restaurant was not: Kazu’s family have a background in gastronomy. His version of “JFC” comes with a little more crunch than the traditional Japanese version thanks to a special batter developed during dozens of tasting and tweaking sessions. It had to be perfect: in this era of food delivery, it’s vital that the fried pieces retain their crispness on the outside and juiciness on the inside. The menu is small and concise and hits all the right spots with the likes of Japanese beer and edamame. Tsu Tsu’s combo of dashi-onigiri rice balls and takuan (pickled daikon radish) is a no-brainer, but our favorite has to be the chicken nan-ban bowl over rice. Incidentally, the restaurant’s name comes from the Japanese letter ツ (pronounced tsu), endearingly used by many Westerners as a happy face to spread smiles during lockdown. Tsu tsu = double the love, and digging into our crispy fried chicken, we certainly felt it. 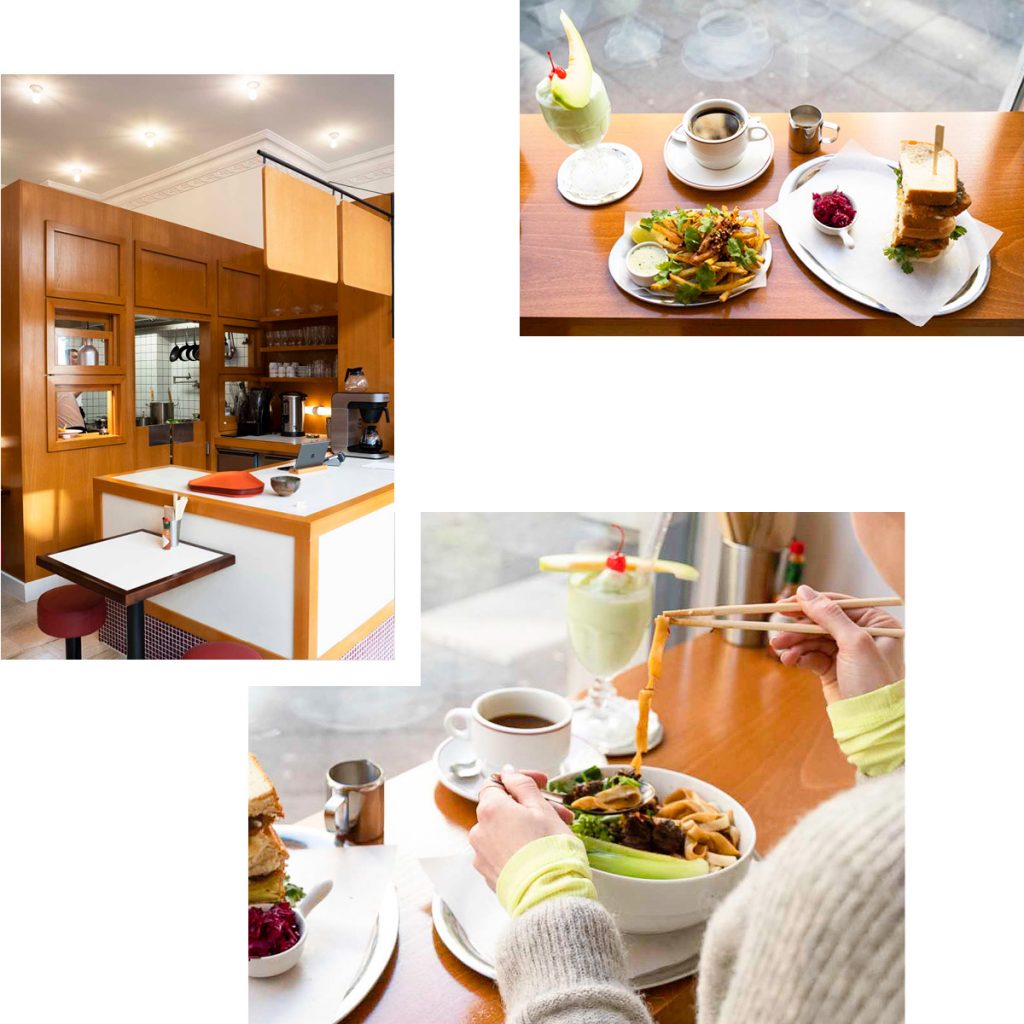 ASIAN DINER CULTURE AT DASHI: FOOD FOR THE SOUL

If you’re brainstorming new places to eat in Berlin these days, chances are you’ll come up with one name sooner or later: Dashi. Over the last few months, a growing community has gathered around the restaurant on Invalidenstraße, regularly stopping by for lunch – and, more recently, for dinner as well. There are many great reasons why: the juicy, crispy Chicken Katsu Sando, the spicy Szechuan Fries and the creamy Korokke Curry are just a few of the dishes that we, too, keep going back for. We especially recommend the Orzata Lemonade, which is wonderfully refreshing thanks to kaffir lime leaves. But it’s also the ambience that makes Dashi so popular: with the wood-paneled walls, the counter, the table lamps and red stools, it feels almost like something out of a David Lynch or Wong Kar-Wai movie. DASHI is a modern, stylish hybrid of an American diner and a Hong Kong “Cha Chaan Teng” café, but even when it’s busy, it engenders its own warm, laid back atmosphere.

The operators, friends Thao and Thuy, were introduced to the gastronomy industry as children in Potsdam, where their parents ran Asian imbisses. At DASHI, they illustrate what it means to combine one’s roots with one’s creative visions. For example, the two tell us that many of their dishes are inspired by the Japanese concept of Yōshoku, which is an interpretation of Western cuisine through an Asian lens. As Asians who grew up predominantly in the West, they don’t tie their identities directly to a particular geographic location or culture, but find themselves embracing a variety of influences and flavors. From the ingredients to the interior to the way the plates are arranged, Thao, Thuy and their team meld both retro elements that pay homage to their roots and modern touches that reflect their own style. This respect for tradition and history coupled with an eye to exploration and evolution is what makes Dashi so special as a restaurant right in the heart of Berlin. 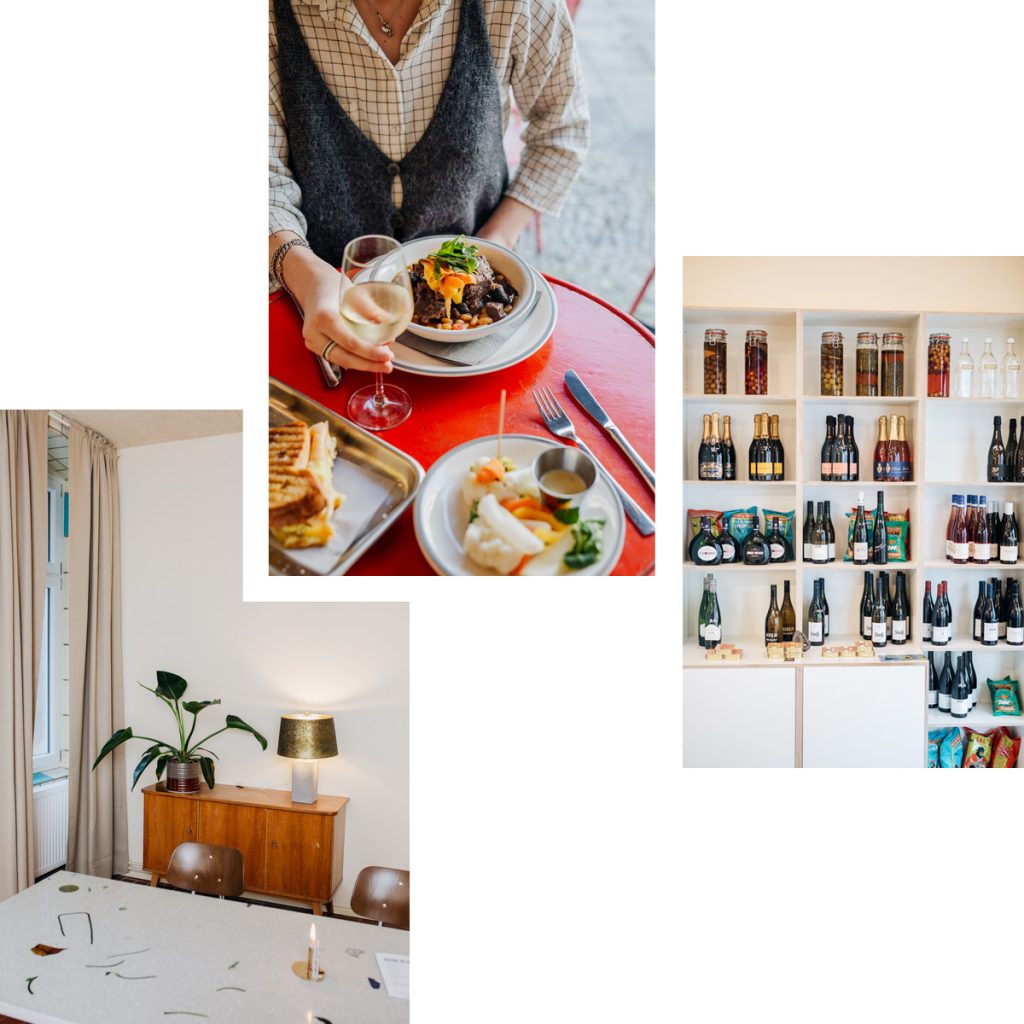 A LITTLE BIT OF MANHATTAN IN MITTE: WELCOME TO PURGAL DELICATESSEN DELI

Purgal Delicatessen’s name is spelled with a “C” on purpose. In the same way the name “Purgal” tells the story of the Polish origin of co-owner Czeslawa Purgal, “Delicatessen” spelled with a “C” is a reference to the infamous New York delicatessens that were also first established by Jewish immigrants. The deli sits in the Rosenthaler Vorstadt in Mitte, in a space that has retained some tiles and the flooring from the East Berlin bakery it used to be. The newer design and tiles were curated by Studio Karhard, and designed to complement the older elements of the eatery. The menu is short and well-considered. There’s the braised rabbit leg: a comforting, delicious dish that comes served on a bed of white beans and also has a vegetarian alternative with carrots. The ham and cheese sandwich stars housemade ham from Havelland, and jalapeño mayonnaise is particularly recommended by Czeslawa Kompagnons and Karsten Ehlers.

You can eat inside overlooking the street, at higher bar seats, on the street seating, or at the terrazzo tables in the back room where they also host events and meetings. If you’re on the go, that’s no problem either: in true deli style, there is a small supermarket in the space which also allows you to take home some items such as Ragù to heat up and eat in the comfort of your own home. There you can purchase items like their housemade pickles, quince jelly or elderflower vinegar from Oderbruch. There’s also homemade cheesecake, apple tart and cookies (we recommend their coconut cookie with organic orange!) made by a friend of the deli. Whatever the mood, it seems Purgal Delicatessen has you covered. 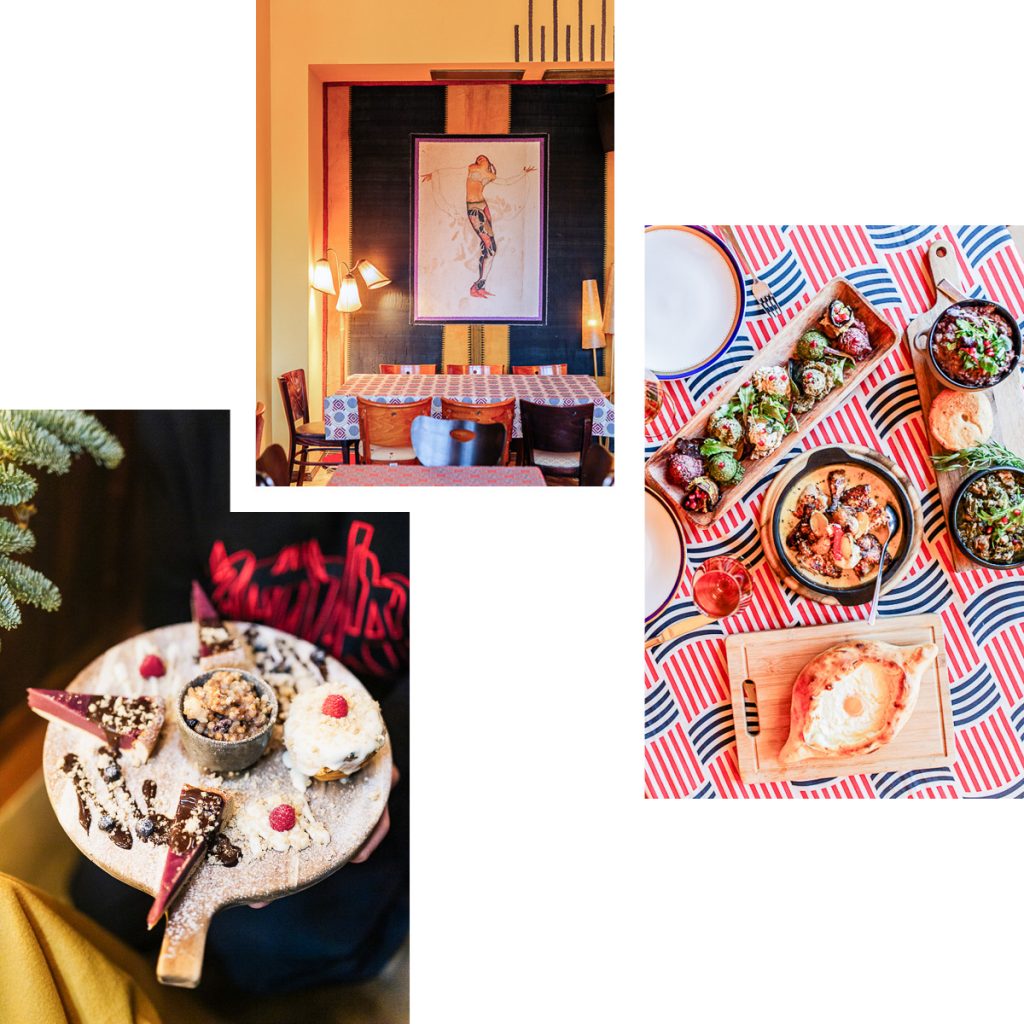 If you’ve never had the opportunity to travel to Georgia, we can highly recommend making a trip to “Der blaue Fuchs” at Kollwitzplatz. The Georgian restaurant has been around since 2019 and is now a popular neighborhood spot. Georgians are known for their hospitality and that’s also evident here. A friendly, cozy and familiar atmosphere with lots of colorful tablecloths, the walls are adorned with different works of Georgian artists from the 1920s such as Petre Otskheli. When it’s warm outside, the terrace is lively with high spirits.

Der blaue Fuchs is not only a restaurant, but also a wine bar: Georgian natural wine is special, as it’s made in clay amphorae. We recommend starting with Georgian amber (orange) wine, along with various appetizers from the menu. Especially delicious: grilled eggplant stuffed with a spicy walnut paste and baked beets with pomegranate seeds. It’s also worth ordering Georgian pastries like “khachapuri” or “lobiani” as well. When it comes to main courses, you are spoiled for choice: Would you prefer “lobio”, a kidney bean stew, or “adjapsandali”, a Georgian ratatouille with eggplant, potatoes and fresh herbs? If you like meat, you should definitely try the famous roast chicken “tabaka” with garlic sauce. Finally, we finished our meal with “korkoti”, a dessert made of wheat, raisins, walnuts, honey and a brandy made from grapes in oak barrels – “chacha”. Small tip: On weekends, it’s best to reserve a table ahead of time. 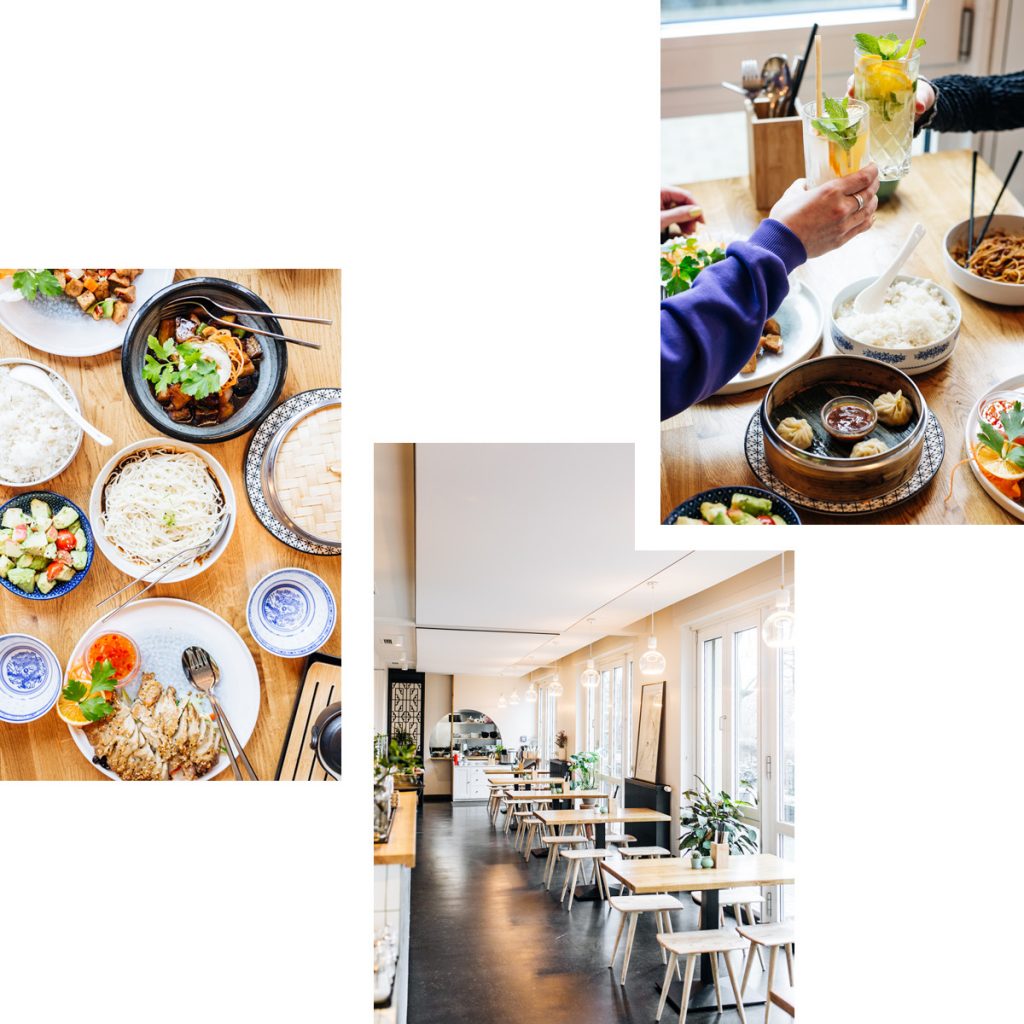 THE BUTTERFLY LOVERS — ALL-VEGAN CHINESE CUISINE BY THE PARK

While I have cooked for my mom, I’ve never opened an entire restaurant for her. This is where Wen Wang – the owner of The Butterfly Lovers – and I differ. Before opening this completely vegan Chinese restaurant, Wen was running Tianfuzius in Schöneberg. Her vegan mother wanted a place she could also enjoy, and so in July 2021, Wen opened The Butterfly Lovers. Located on the edge of Volkspark am Weinberg in Mitte, the restaurant is a bright and approachable lunch spot that’s still sleek enough for dinner. Fresh flowers lift the space, complementing the floral wallpapered design on the bar. In summer, seating for 80 people spills out onto the terrace. The menu is hearty but not heavy: served with rice, the main dishes include fried vegan duck with salad and pickles, cauliflower with fermented black beans, braised mixed mushrooms in wine sauce and fried lotus roots with bell peppers.

We especially loved the Sichuan-style vegan chicken with tofu, onions, chili and peanuts, served in a crackled bowl of deep-fried rice paper and spiced with a generous amount of Sichuan pepper. The waiters can recommend dishes with less spice if you like, but if you’re not afraid of heat you’ll enjoy the Sichuan pepper throughout the menu. While vegan meats can sometimes feel a lazy option, the plant-based creations here impressed with their great flavor – especially the mock duck. To accompany there’s a drinks menu with beer on tap and soft drinks (we suggest the “Spring of Jade” with lime juice, ginger ale and soda) and a dessert menu that includes Mochi by Berlin masters Chubby Cheeks. Whether you are vegan or not, lunch or dinner at The Butterfly Lovers is a truly tasty choice. Wen Wang’s mom: you should be proud.