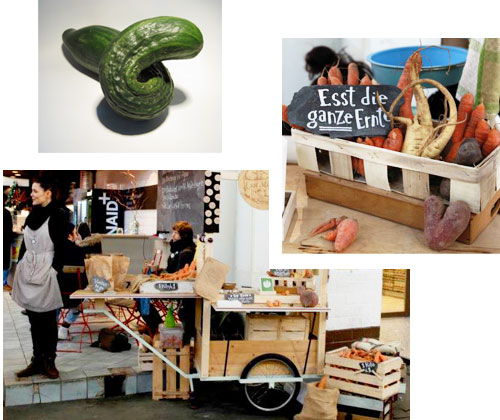 Tanja Krakowski is a product designer who became a culinary expert while working on her bachelor’s thesis; instead of creating a perfectly designed object she took a closer look at the imperfect vegetables that never make it to the ordinary supermarkets. Whether it is a heart-shaped potato or a three-legged carrot, Tanja loves them all, and this led her to sell them at the Markthalle IX. This weekend she and her new partner Lea Brumsack will show up again, only this time instead of selling their “Culinary Misfits”, they will exhibit some of the nicest oddballs and offer vegetarian meals made from produce grown by local farmers like Axel Szilleweit of “Teltower Rübchen”. You’ll also find day-old breads that were saved from being thrown into a dumpster – mind you, they’re all still good enough to eat. Lunch is around 4 to 8€, but you will get some food for thought at no cost. Visit their Facebook page to learn more!