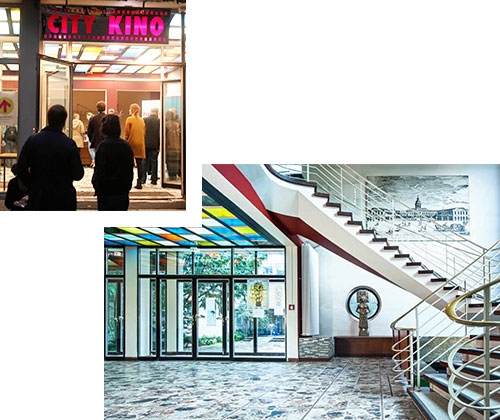 FROM HORROR TO ARTHAUS: THE NEW CITY KINO IN WEDDING

Wedding now has its own arthouse cinema, located on Müllerstrasse, a street worth visiting on its own – there’s been a lot going on as of late, like the gallery in a former funeral home. So if you live in Wedding, there is no need to trek to Mitte or Prenzlauer Berg to watch alternative movies anymore: simply head to the Centre Français de Berlin. Built by the French allies as a part of the CFB In 1958, entry was only allowed for the French army and their families until 1992. Later it was opened to the public, but kept quiet due to financial problems. Now Anne Lakeberg and Wiebke Wolter are curating the program. The upcoming film that will be shown during the following weekend (11. & 12.10.2014): The Texas Chainsaw Massacre – a horror film from 1974 that wasn’t allowed to be shown on the big screen until recently. I’d say this film perfectly fits the morbid charm of Wedding. (Text: Lorena Simmel / Photos: City Kino Wedding (left), Zffa (right))