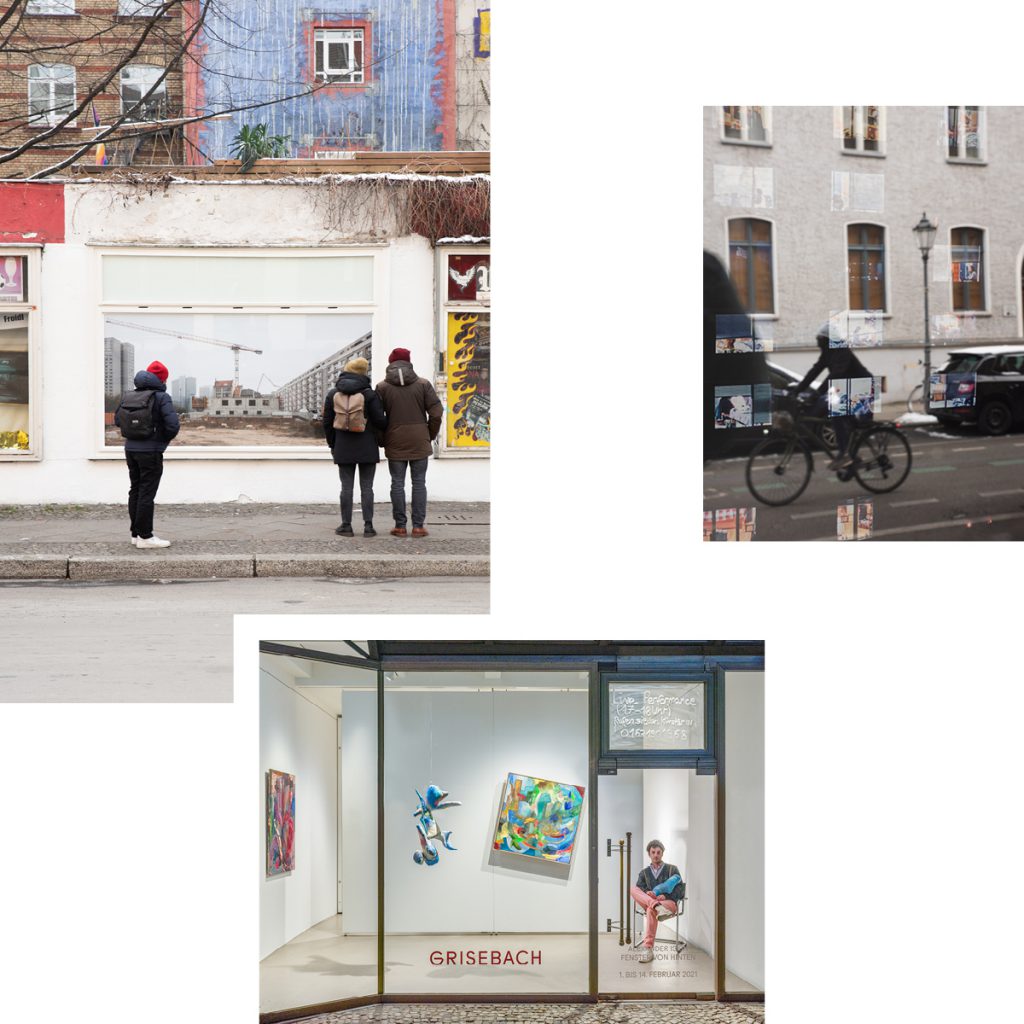 ART BEHIND THE GLASS: TOUR THE EXHIBITIONS BEHIND BERLIN’S GALLERY WINDOWS

Although the doors of galleries are still shut, that doesn’t mean you can’t still enjoy art. A number of Berlin’s gallery owners are discovering the potential of using their display windows as exhibition spaces, joining more established window galleries that have used this format for years. They show art not in walk-in rooms, but in windows and display cases that can be visited around the clock. One of the best-known projects of this kind is Sox, a three-meter-long display window that is easy to miss at first glance. The Kreuzberg space is currently hosting photographers from Lette Verein Berlin who have revisited the work of Berlin photo artist Michael Schmidt with their own pieces. Visual artist and photographer Sabine Hornig also deals with urban space. She has covered the Berlin-Weekly showroom in Mitte with a curtain that featured photographs of brightly lit windows taken in the past few months, reflecting the oppressive mood of the lockdown.

Meanwhile, the many cinemas threatened by the pandemic are the subject of artist Richard Thieler’s work. His photographs of closed Berlin movie theaters will be on display around the clock in the windows of the Infostation Siemensstadt starting Saturday (06.02.2021). From Siemensstadt it takes 20 minutes to reach the Kleistpark U-Bahn station, where starting Friday (05.02.) curator Isolde Nagel is showcasing her art piece A Trans on the mezzanine floor. The work includes Martin Juef’s enchanting photographs captured during nighttime strolls through the Brazilian city of Belém. Over in Charlottenburg, painter Alexander Iskin offers another show behind a window pane: in the exhibition space of the Grisebach auction house, Iskin takes instructions by phone from passers-by every day between 17–18h, allowing them to participate in his compositions. Kunstbüro Hohmann und Heid, which occupies the windows of a Friedrichshain ice cream parlor with art during the winter months, also relies on interaction. The best time to visit is weekend nights, when Sophie Hundbiss and Robin Woern’s light shows shine into the darkness, with accompanying sound that can be accessed via a QR code. It’s one sign that, despite everything, Berlin is still glowing.