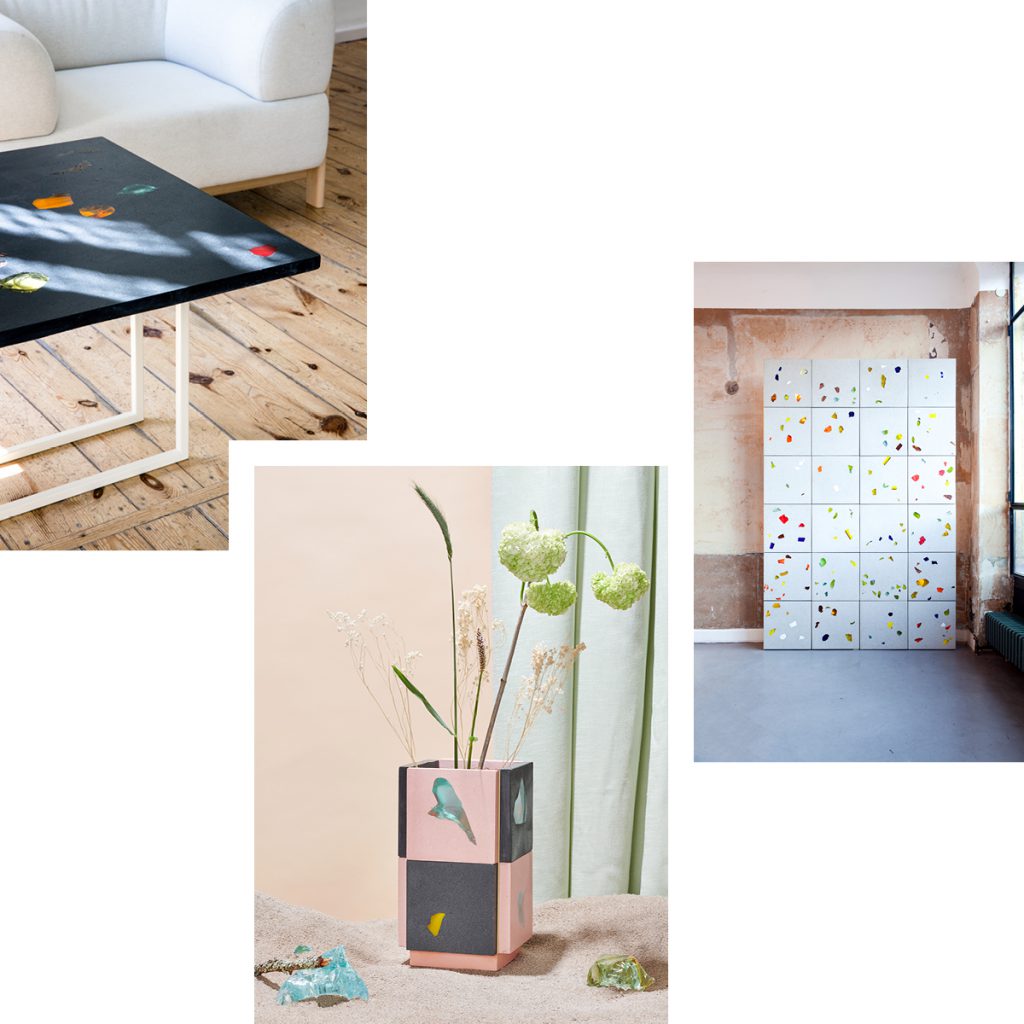 How exactly does one give color to concrete? Berlin-based artist Duo Jeschkelanger made it their task to find out. When multi-colored glass fragments meet concrete, an unmistakable, dazzling neoterrazzo is created. Basis Rho is the material that was developed when the duo decided to give new life to the leftover glass fragments produced by Germany manufacturers by using them for their works. Their translucent surfaces are so finely crafted that the sharp edges between glass and concrete are barely visible. You can use Basis Rho to liven up your interior, and it’s also available for use on your walls or floor tiles. Jeschkelanger is constantly experimenting and creating new pieces, such as the prêt-à-porter vases, which add that extra touch. They are building a bridge between industry and art and are ready to break new ground. (Text: Ramona Razaghmanesh / Photos: Jan Brockhaus & Tabea Mathern for Basis Rho) 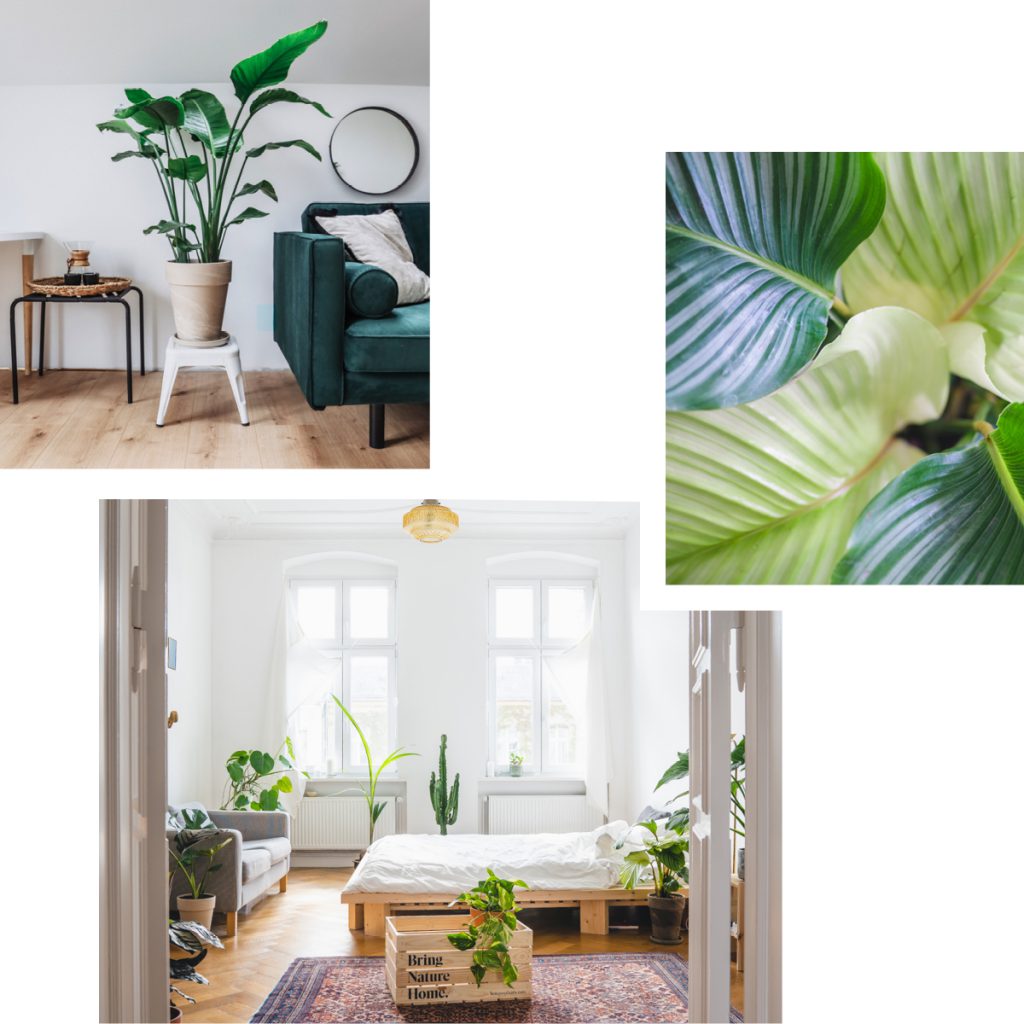 Fiona Ficus, Monica Monstera, Stella Strelitzia – at Bosque they care so much about houseplants they give them names. The Kreuzberg-based service hand delivers a great selection of lovingly-cultivated plants right to your door, meaning the days of tiring trips to the garden center are gone. Launched in 2018, the website offers themed plant boxes containing a pre-selected set of gorgeous greenery, already planted in elegant terracotta pots of your choice. If you are a beginner or take a “hands-off” approach to gardening, the Unkillable Plants Box includes hardy desert dwellers and cacti, which like all Bosque’s species are sustainably bred according to FSI 2020 standards and come delivered fresh and healthy in a sleek wooden box. Whichever box you pick (you can make your own too!), you can give your new green friends a great start with the accompanying app that offers care tips and reminders. That’s not all: the whole service will be CO2-neutral by the end of 2020, making it a solidly green choice for indoor greenery. (Text: Benji Haughton / Photos: Bosque) 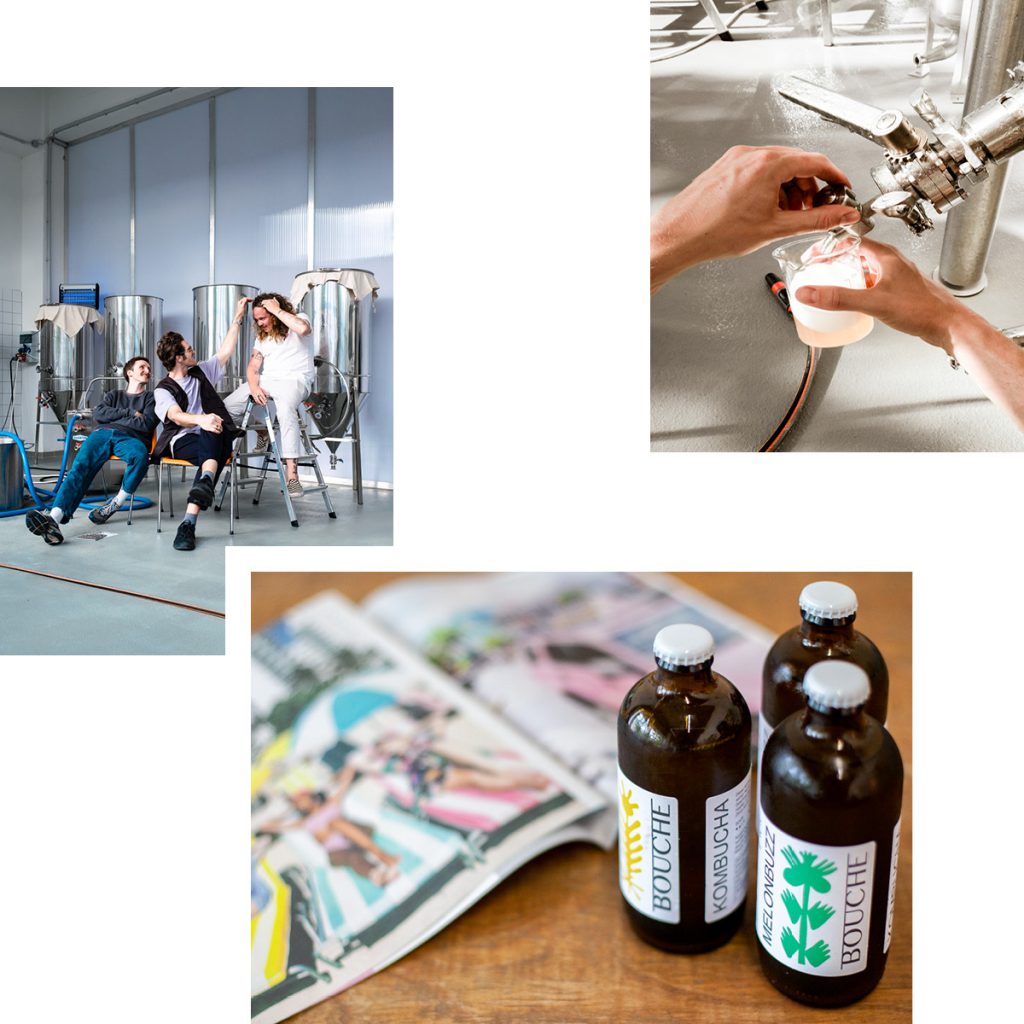 BOUCHE KOMBUCHA — LEMONDROP AND MELONBUZZ GIVE YOU THAT EXTRA FLAVOR

Have you ever tried Kombucha? No? Then you should taste Bouche. You’ll enjoy the aromatic diversity of the traditional fermented beverage with every sip. There are many myths about the origins of this fermented tea. What is clear, however, is that many people have contributed to its history, and today, the drink is popular worldwide and has become quite common in Germany. This young kombucha brewery is located in Berlin-Pankow. What began as a friendly collaboration quickly grew into a small production company. The Bouche brewers focus much of their energy on developing new brewing techniques and unusual flavors by researching creative ingredients, as well as using different types of yeast and hops. Their Lemondrop captivates with its distinctive citrus notes, herbal character, and light elderflower aroma. Or try Melonbuzz, which is named after the refreshing combination of cantaloupe and Szechuan pepper. The melon gives the drink a summery freshness, while the pepper surprises with its mild spice. You can enjoy the summery drink at Two Trick Pony, Protokoll, and various other locations. (Text: Ramona Razaghmanesh / Photos: Ramona Razaghmanesh, Yannes Kiefer & Florian David)

You can order Bouche online. Check @booouuuche to see which restaurants and cafés serve kombucha in your area.
Bouche
@booouuuche 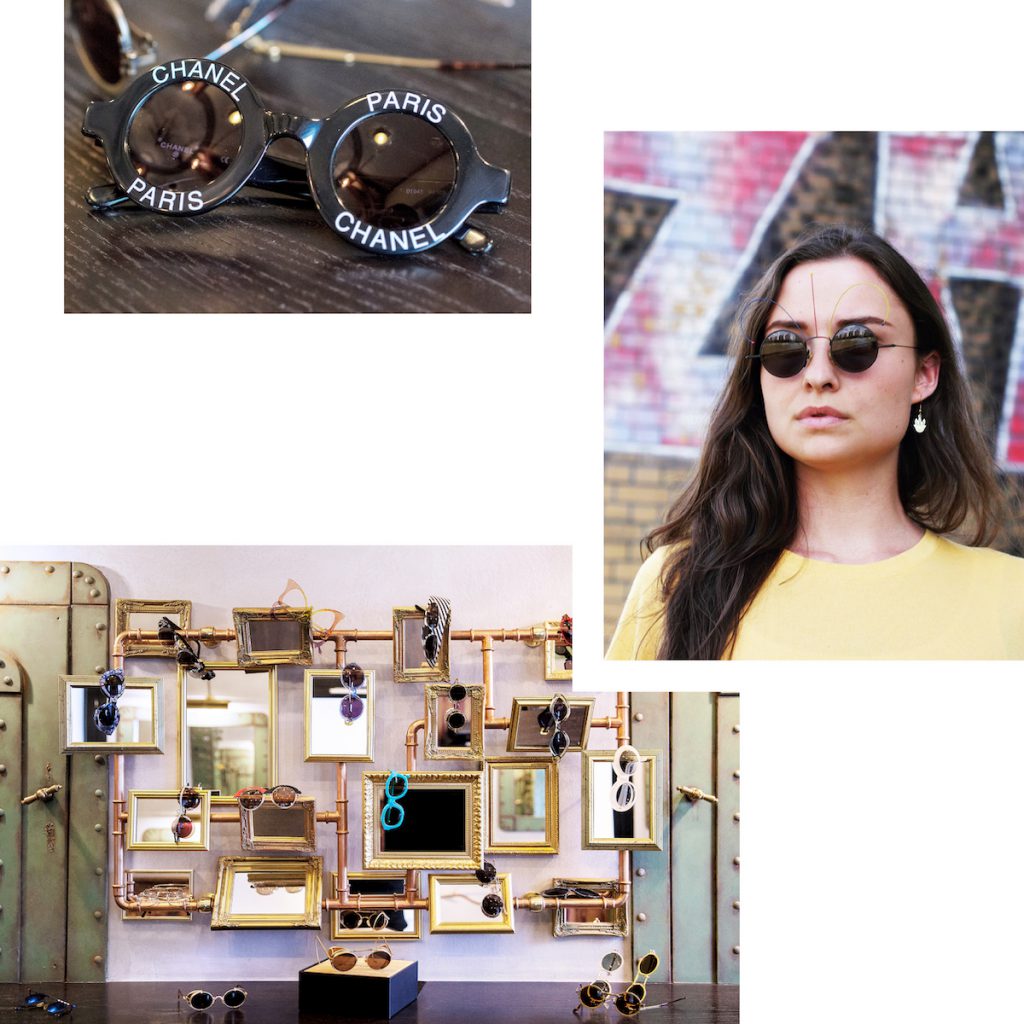 As you enter the industrial courtyard on Potsdamer Straße it’s easy to miss Brillenschatz at first glance. But when you do locate this sunglasses shop, you will discover a treasure trove of shades. The shop is the passion project of Abdullah Demir, who’s been collecting vintage glasses for years. After running a stand on Sundays at the Mauerpark market, Abdullah decided to find a permanent location and opened his place in 2015. Among his collection of eyeglasses, you’ll find extravagant mens and womens frames including custom-made creations and unique pieces from the best fashion designers. Brands including Porsche, Christian Dior, Versace, Casanova, Chanel and Ray-Ban are all represented with exclusive vintage pieces. In 2017 Brillenschatz was named by The New York Times as one of Berlin’s “Five Places to go” though the shop is still very much an insider tip – not least because there is only one place in town with such a collection. (Text: Cem Sari / Photos: Brillenschatz, Erdem Akkaya & @pak_369)

Cem Sari, who came to Berlin from Istanbul at a young age, works as a sound engineer and is the owner of Sariton Records. 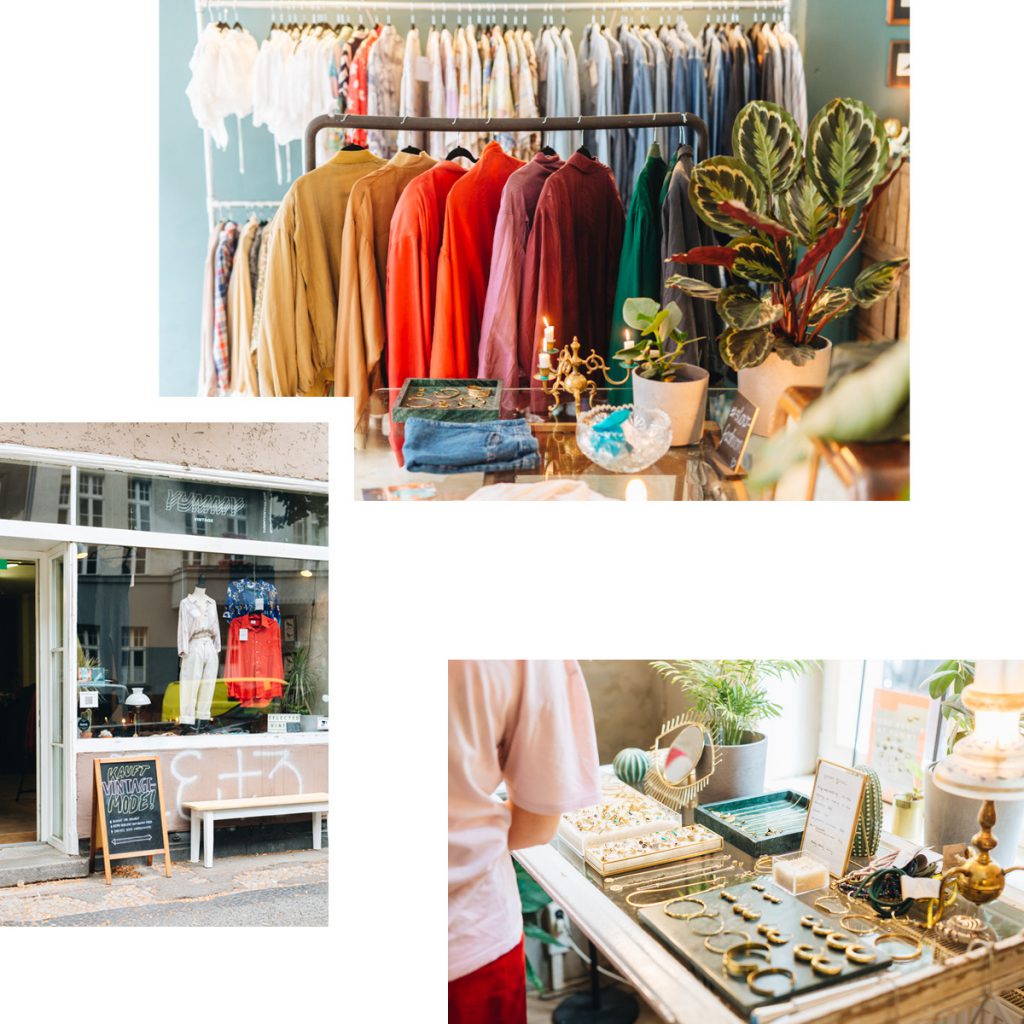 My motto in life is quality over quantity, but when it comes to clothes even second-hand garments are often beyond my student budget. Luckily the founders of  Yummy Vintage Carolina and Aron have heard my call. They opened their Graefekiez second-hand shop in March 2020 and with it provide an oasis of good taste, made even more tranquil by the weekly yoga classes they hold in the store. Carolina selects each garment individually for its style when she sources the clothes and gives absolute priority to material quality. From designer labels to simple well-finished pieces, you can find everything here – even beautiful jewelry! Carolina often adjusts and alters the garments, making them truly unique buys, which best of all are well within even a student’s budget. (Text: Elena Zurbuch / Photos: Savannah van der Niet)

German-Italian Elena Zurbuch grew up in Berlin. She studies film production and wishes the world looked like an Antonioni film.