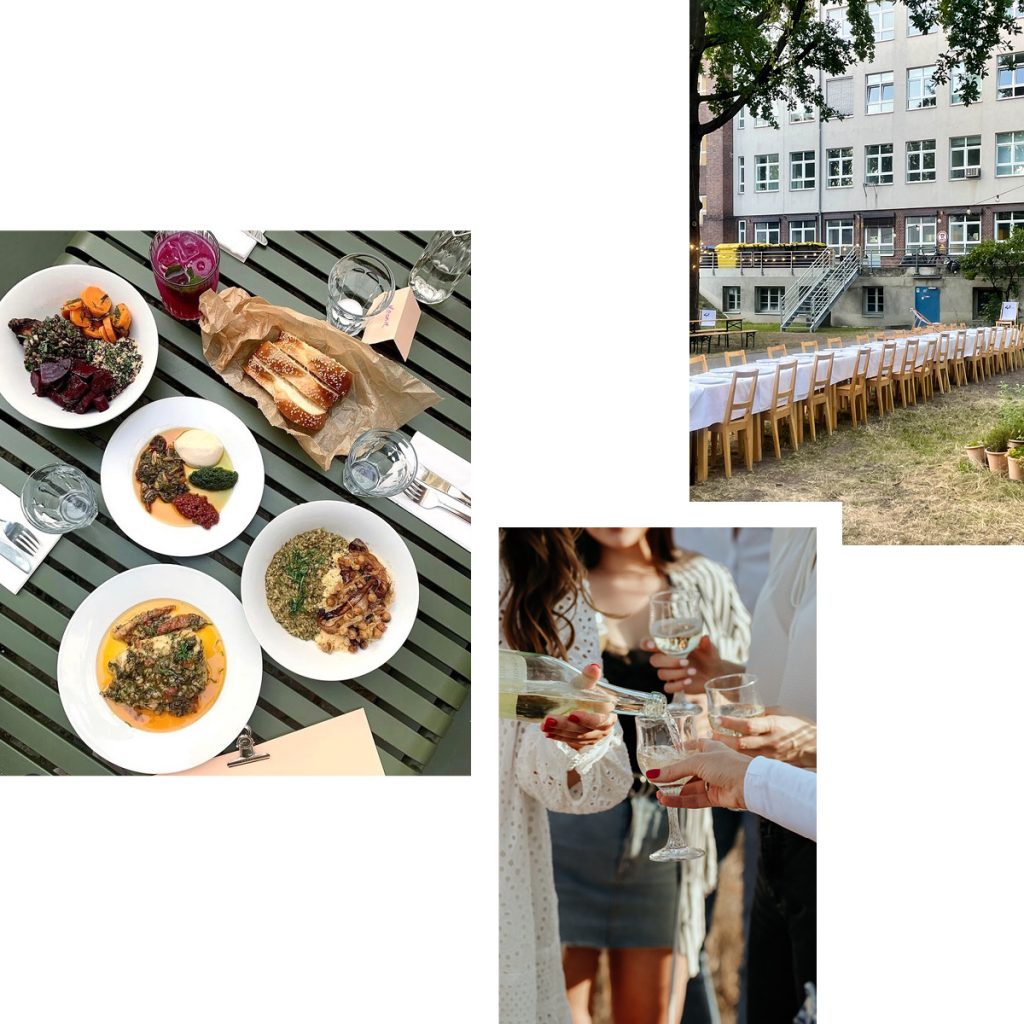 Born and raised in a Jewish Moroccan family in Israel, Yuval Belhans has been busy since arriving in Berlin in 2015, running kitchens and even creating the menu for Kitten Deli. Here’s one more of his projects: Kiddush, a supper club inspired by traditional Jewish Friday night dinners. Serving up challah and unforgettable sabich sandwiches, events are being held at cantine collective La Vie en toast in Neukolln every Friday for the rest of summer. For our visit, we were seated outside on a long white cloth table directly under a linden tree, an open grill glowing behind us. No doubt: this is how alfresco dining should be. Accompanying the homemade challah bread – still warm from the oven – was tahini, harissa and s’chug (Middle Eastern hot sauce with peppers, garlic and coriander) and a selection of Yuval’s hearty salads. The challah stuffed with ground beef was one of the most flavorful bites I’ve had in a while, topped with S’chug to cut the richness. Utterly perfect.

The arrival of the main dishes – Moroccan chicken, fresh-line seabass, charred cabbage and stuffed vine leaves – caused guests to erupt into chatter as they figured out who would get the first bite. Diners sitting at our shared table went from polite conversation at the beginning to swapping dishes with strangers by the end of the night. It felt like a real family dinner, with simple, flavorful dishes. A new Friday-night tradition? We think so. 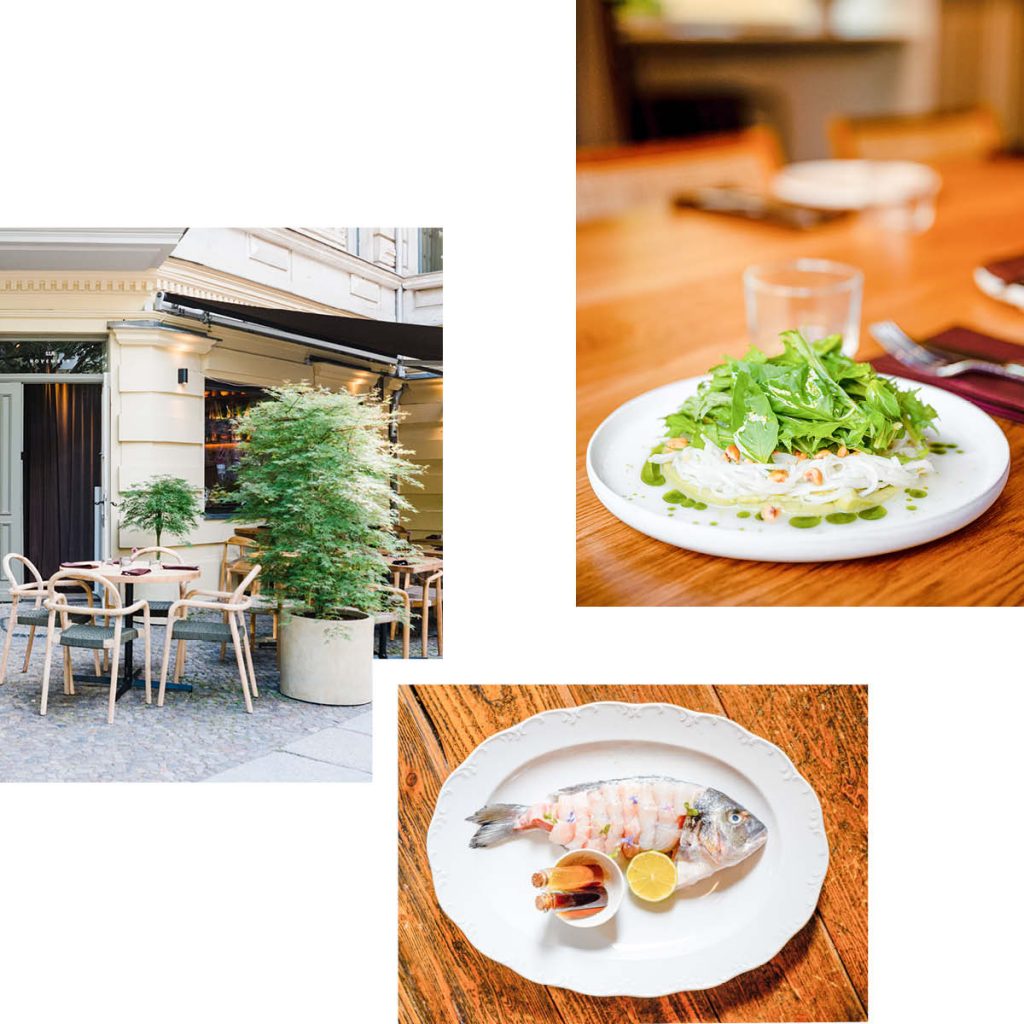 Same name, different vibe: November is the restaurant that has taken over the eponymous cafe that previously stood on Husemannstraße in Prenzlauer Berg. Run by hospitality group The Catch Family, the eatery now serves high-end Japanese-inspired cuisine with plenty of seafood imported fresh from Spain and Japan. The scallops, which are served with grapefruit and ginger, are particularly impressive, while the turbot with miso and shiitake butter is great to share. Sushi fans should try the Kim nigiris, carpaccios and tartar rolls from chef Ruslan Kim. If you are vegetarian you’ll also be catered for: the deep-fried oyster mushrooms and edamame hummus and broccoli with peanut sauce make for captivating starters and mains, respectively. The drinks menu includes 11 options (November being the 11th month of the year) created by bar chef Vasily Sapunkov, who fuses European and Japanese flavors with finesse. A classic gin and tonic is refined with shiso, and the Moscow Mule is replaced by a Tokyo Mule with kaffir, rum, yuzu, ginger and lemongrass. The brasserie is open until midnight, giving you plenty of time to feast your way through the entire menu. Choose a table on the plant-filled terrace or in the warm oak-clad interior and start sampling. 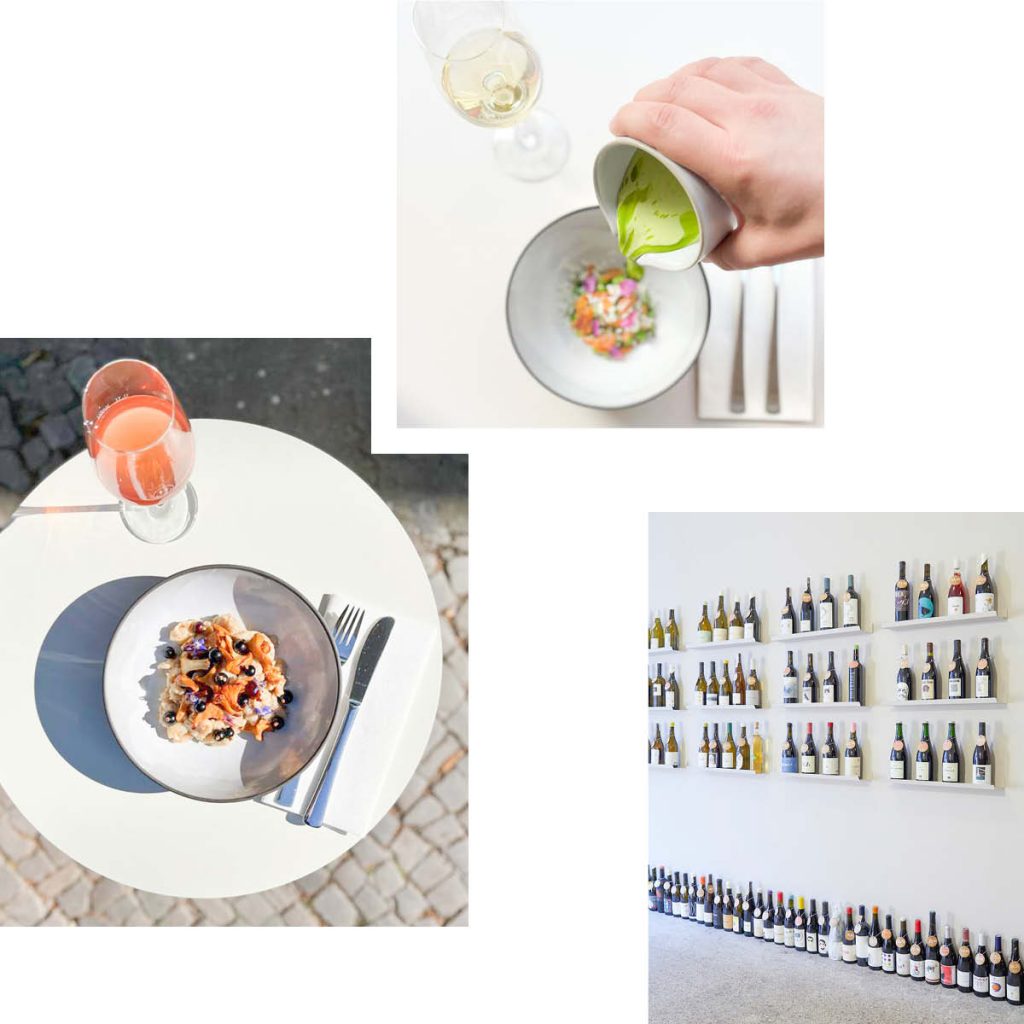 A good mood is guaranteed at Treat, not least because of the big gold smiley emblazoned on the front of the Neukölln wine shop. The logo also features on Treat’s glasses, in which they serve the likes of low intervention and biodynamic orange wine from the Czech Republic and Portuguese Pet Nats (see our article from 2020). Now owner Julia Böning has a new “treat” in store: she’s invited the team from Feed the Pony to cook for a series of weekend dinner nights. In the kitchen is Hannah, who worked at nearby Palsta and Brasserie Lamazère, while up front is Marty, who brings expert knowledge and lots of passion (Maja, the third in the group, is currently on parental leave). The trio share a passion for seasonal, regional ingredients of the finest quality. Dinner is served on small plates and bowls, with home-baked dark rye bread and whipped creamy butter on the side. The refreshing summer tomato salad comes with a dressing of rhubarb and elderberry, while the vichyssoise soup is given a green makeover with crunchy peas and fish from Stechlinsee – easily the best dish of the evening.

That said, the fermented potato waffles with crème fraîche and unripe gooseberries are a fun, surprising standout. For dessert you’ll find a slimline spin on Topfenknödel served with slivers of almond on top. From a culinary standpoint it’s all great, but it’s the partnership between Treat and Feed the Pony that’s where the magic happens. Treat customers had long been requesting a food menu to go with their wine – a wish that has now been fulfilled. Whether you class it as food with wine or wine with food doesn’t matter – both have equal billing here. The Treat team are there to guide you through the evening’s wine list: discovering Portuguese mousse sparkling wine was a highlight of the evening, as was the “Aparte Amber Orange” with its funky flavors. In short, the food and drink wowed us – as did the personable team’s incredible knowledge and expertise. We went home with grins as wide as the smiley on the window.

Treat Berlin, Okerstr.35, 12049 Berlin–Neukölln; map
Feed the Pony Fridays & Saturdays from 18h; you can request a table by email 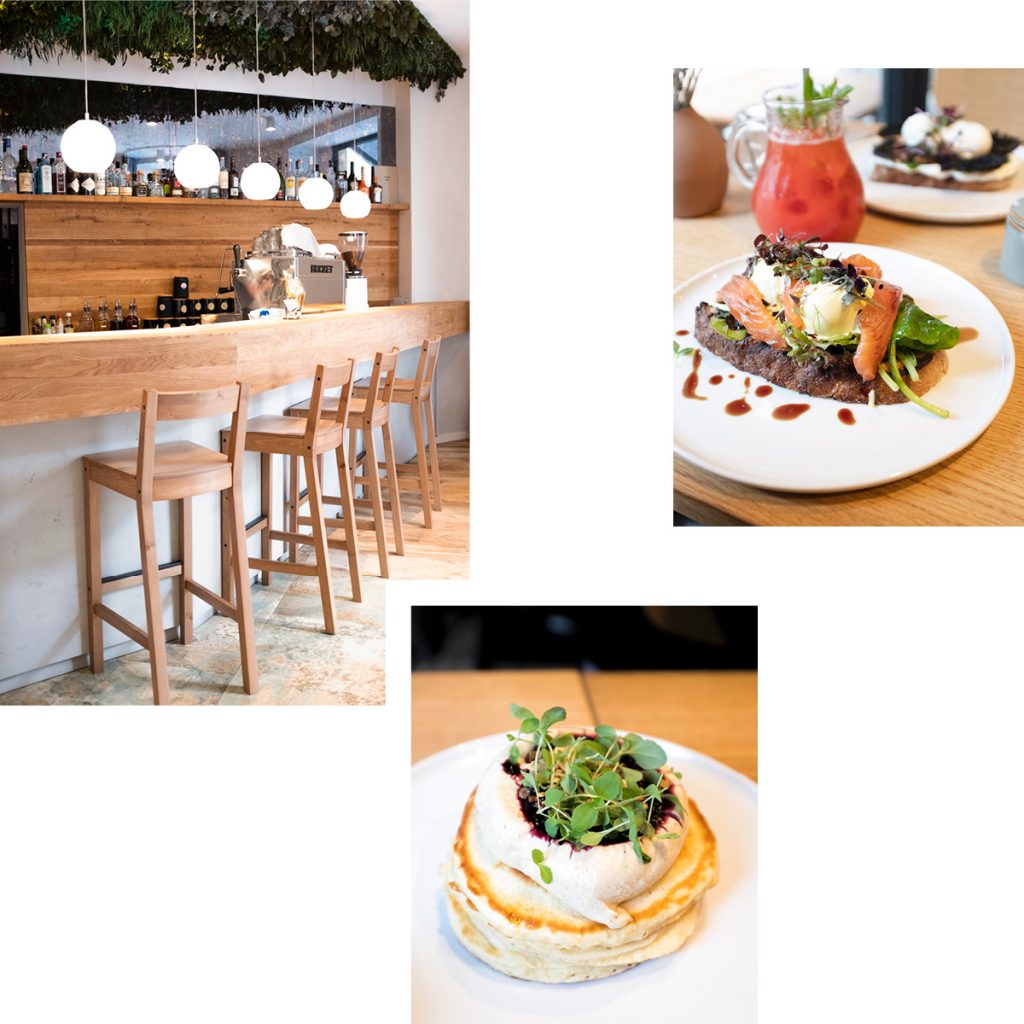 As soon as you enter Nomad, the smell of coffee and all sorts of sweet and savory temptations hits your nose. Eggs Benedict with home-pickled salmon, deliciously sweet pancakes with a vanilla and cheesecake cream and perfect portobello mushrooms on sourdough. The challenge here is deciding what to order: as its name suggests Nomad serves up a smorgasbord of dishes inspired by different cultures. The restaurant’s founders, Nico and Max, spent a lot of time traveling and gathering inspiration before opening up shop on Borsigstraße in Mitte. Brunch is served until 15h, but it’s the evening service where things really get interesting, with a five-course dinner served alongside matching cocktails. This all-day line up has allowed the restaurant to gain a solid following among locals since opening in September 2021.

Love and attention also goes into the design, from the contemporary interior to the charming ceramic plates, each of which is individually designed and shaped. Outside, the spacious seating area stretches along the entire front window, making it the perfect place for a coffee in the morning sun. Spending time at Nomad puts a smile on your face, not just because of the food and drink but the pleasant atmosphere and approachability and warmth of the staff. You’ll leave well-nourished and ready to bring the good vibes into the rest of your day. 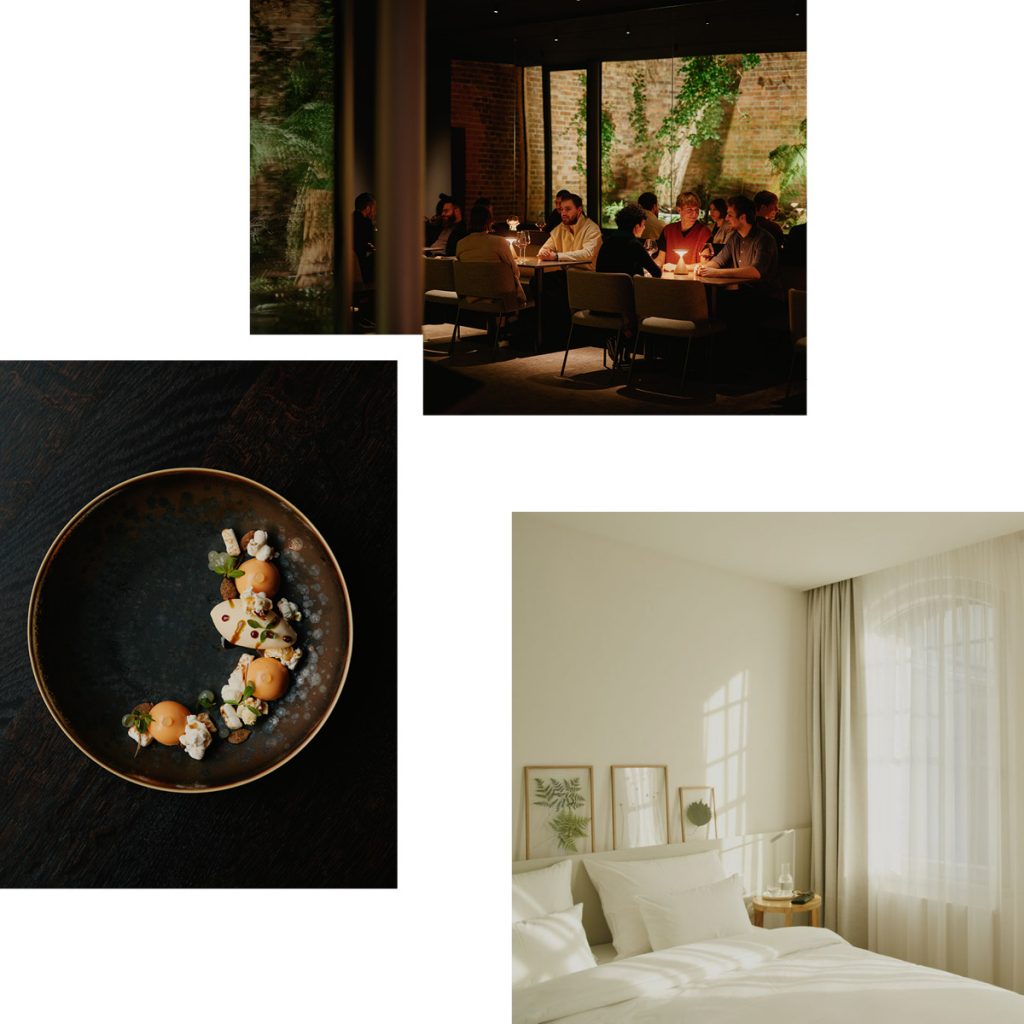 As soon as you enter the second courtyard on Kantstraße 79, it suddenly gets quiet, cool and almost…sacred. From the entrance, a path winds its way towards a building: on the left is a planted wild garden, on the right a patch of abandoned land that has been completely reclaimed by nature. At the end is the entrance to what is now the Wilmina Hotel. It was once the Charlottenburg women’s prison whose 19th century site remains as a listed building. The first courtyard leads to the prison entrance which now serves as the main hall of Lovis Restaurant. The building facing the street is the former district court which has twice served as the venue for Amtsalon, a popup-slash-art-fair bringing together Berlin galleries. The concept, along with the transformation of the site itself, is the work of architects Grüntuch Ernst, who have managed to create a unique place without concealing the buildings’ occasionally dark history (during the Second World War, women resistance fighters were imprisoned there). Instead, the past is ever-present but never overwhelmingly so. The hotel rooms are encased ;in appropriately thick walls where you can sleep under dried flower arrangements in beds so comfortable that it’s no surprise that the hotel tested dozens of mattresses before choosing the perfect one. Everything is tasteful and reverent, unostentatious yet full of soul – something hotels free of the burden of history rarely achieve.

The hotel restaurant, for instance, feels like a restaurant that happens to be by a hotel. Its location allows you to dine without going through the hotel itself, giving you a feeling of absolute privacy. When you enter the bedrooms, your body feels ready to relax: after a shower you’ll want to go to bed with a book and never get up again – unless it’s to pay a visit to the sauna or get some food, that is. If it’s the latter, you’ll be well catered for at Lovis. Chef Sophia Rudolph (who you might know from Panama) serves consistent contemporary German cuisine. The focus here is on seasonal and regional vegetables – and that includes the breakfast, which is served in a special little nook exclusive to hotel guests. You’ll be served the likes of cheese from the Blomeyer’s Käse shop around the corner. Just another reason for a staycation out west – a place that lends itself perfectly to a break from big city life.