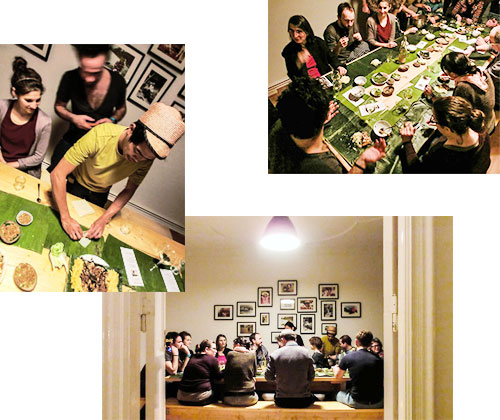 Filipino cuisine has to be the most underrated of the Asian continent and it’s definitely the most underrepresented. There is maybe one restaurant in Berlin where you will find an attempt of a Filipino dish on the menu and that’s at a Pan Asia restaurant. So it brings me great joy to tell you that Filipino food has finally arrived in Berlin – and authentic one at that. Jeepney a la Stew is a new supper club from Pepe, a performance artist and chef. Together with his partner Bruno they promise to take you on a culinary journey around the 7,107 islands by sharing stories and dishes that get you closer to a culture that has been so unreachable till now. For those of you who are unfamiliar with the cuisine, think a mix of Chinese, Spanish and pacific influences. A lot of sour and sweet and eating with your hands. The next dinners take place this weekend (14. & 15.2.2014). Sign up to his mailing list to receive all the invitations to his upcoming dinners. See you there!

Kavita Meelu has lived in Kreuzberg since 2010, is the co-founder of Street Food Thursday, creator of Mother’s Mother and Burgers & hiphop; follow her on instagram here.