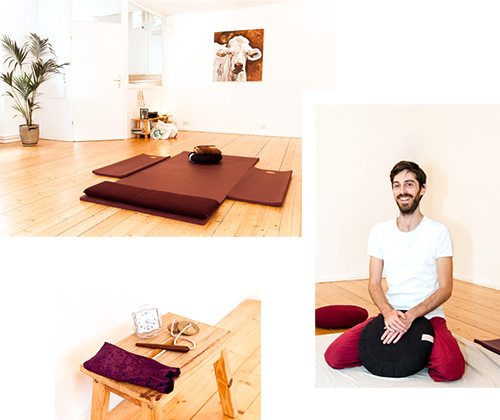 RELAX YOURSELF WITH THAI YOGA THERAPY BY NICOLAS RENARD

He was once one of us: tense and out of balance due to too much work sitting in front of a computer. Then Nicolas Renard decided to try a Thai Yoga massage. It worked so well that it convinced him to change his life. Subsequently, the Frenchman decided to attended the renowned Palm Lotus school in Montreal – his hometown before settling in Berlin in 2013 – and learn this special technique. In comparison to the classical Thai massage created to cure the problems caused by physical labor, the Yoga Thai Massage is a version adapted to the needs of city dwellers merely performing brain work. Where classical treatments, as far as I know, work primarily on your body, Nicolas’ approach is very intuitive as he palms and thumbs along the body’s energy lines and adds pressure while lifting, pulling and rotating your limbs. Some of these movements will seem familiar to you, if you do yoga. He also offers advice on adapting your food habits to match your body type according to Ayurveda as well as personalized programs for home workouts. Booking an appointment with him sounds like the best end-of-the-week investment for me for right now. Companies are welcome to call him for in-house services too. (Text: Nina Trippel / Photos: Benjamin Lindenkreuz)