Cee Cee is a Newsletter

Cee Cee is a weekly email magazine with hand-selected recommendations for Berlin and beyond. Every now and then you’ll find paid posts as part of the newsletter, marked as “Sponsored Posts”. Subscribe here to receive Cee Cee every Thursday and follow us on Facebook and Instagram for more tips! 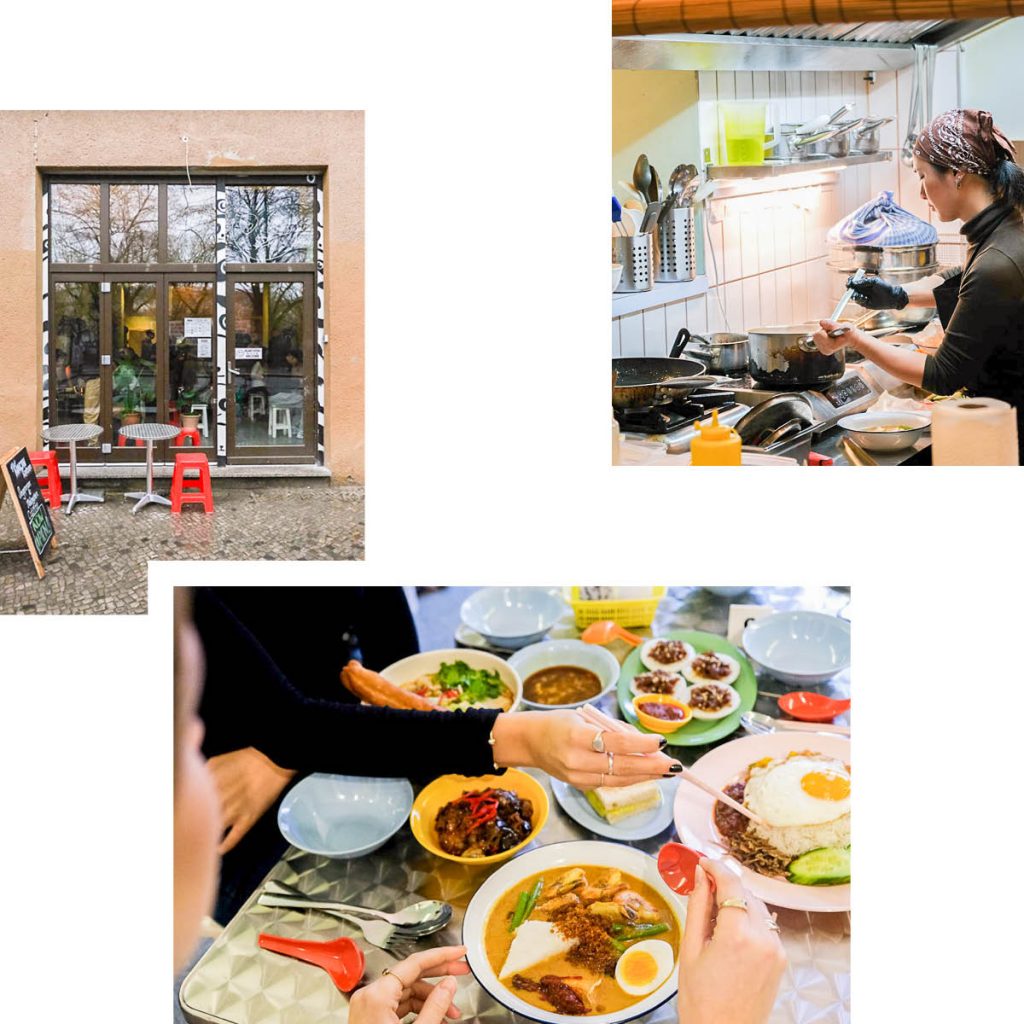 Malaysian-Singaporean restaurant Ma-Makan is bringing new flavors to Berlin. Although the German capital is known for its culinary diversity, traditional Malaysian dishes are hard to find. Kaylin Eu, who was born in Australia and is of Singaporean descent, has taken her roots and passion for her family’s cuisine to Berlin. Her dream was to create a sense of home through food, so she founded Ma-Makan, one of Berlin’s first kopi tiams (a type of cafe found in Malaysia, Singapore and Indonesia). Ma-Makan translates to “Mamma, eat.” Kaylin’s mother always said this to her grandmother before she started cooking, as a tribute to her hard work. Ma-Makan first launched in the form of smaller pop-ups in a wide variety of locations around the city. By the end of 2022, Kaylin was able to realize her dream and established her own restaurant, right on Lausitzer Platz.

The cuisine is inspired by traditional family recipes, infused with Kaylin’s own touch. My personal favorites were the Chwee Kueh, a steamed rice cake, and the Kaya Butter Toast, which is dipped in a mixture of eggs, pepper and soy sauce. Main course options include mushroom congee, lontong sayur lodeh and traditional Malaysian nasi lemak, a rice dish with fried egg and chili sambal. In addition to the food, Ma-Makan stands out for its interior: the modern space pays homage to hawker center restaurants – semi-open fast food restaurants on the streets of Singapore, Malaysia and Hong Kong that are known for their inexpensive meals. Above all, Kaylin wanted to capture the chaotic spirit and invite diners to immerse themselves in a different culture. She has succeeded in doing just that. Ready for a culinary getaway to South East Asia? We are. 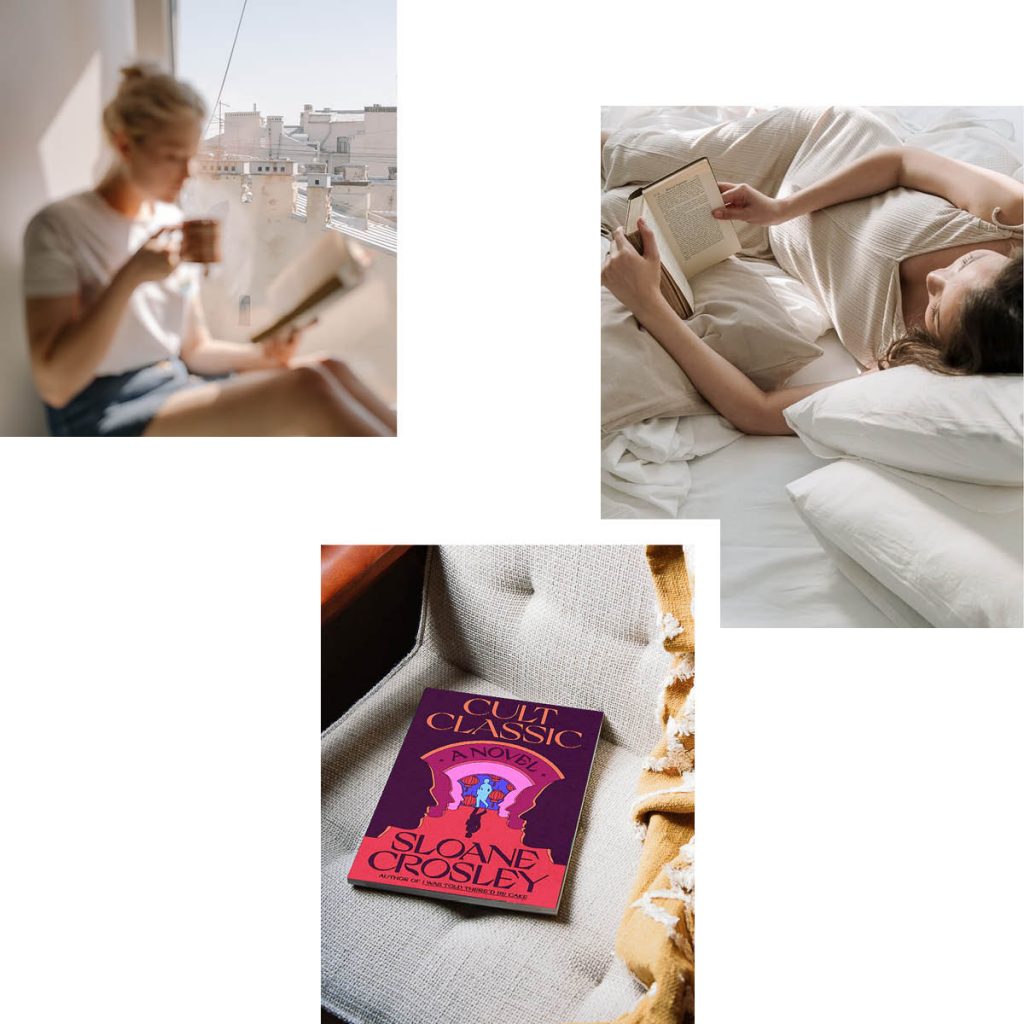 Contrary to what the title suggests, Helene Hegemann’s story collection Schlachtensee is not set in southwest Berlin. Her 15 stories take us to different parts of the world, to different people, all loosely connected. There’s Esther, surfing on the Atlantic coast of France and reflecting upon a lot, namely her father’s cancer. There is Ketti, trundling through the Austrian countryside by train on Christmas morning, having slept through the night. The stories lead to the Volga, to Kitzbühel, to a garden in South Carolina and to a hotel room on the Nile. Cleverly and clearly, Hegemann describes the contradictions and pain, but also the vulnerability and openness with which her characters drift through life. The protagonist in Sloane Crosley’s new novel Cult Classic is also adrift: Lola, a newly-engaged journalist in her late 30s, runs into one of her ex-boyfriends in New York’s Chinatown and doesn’t think much of it – until she meets another former love the next day, and another the day after that. That these encounters are no coincidence becomes clear by the time her former boss (previously an editor, now a self-declared health guru and millionaire) tells her that he has founded a new start-up. It’s supposed to help people get over breakups – and Lola was chosen as its first test subject.

The fact the book doesn’t resemble a bad episode of Black Mirror is due to Lola’s wit, her skepticism, and the wicked observations that take aim at everything that is hip and current. In the end, it seems, the only constant in Lola’s life is the city in which she lives. Lola shares this lostness with the characters in Hanna Bervoets’ new novel, We Had To Remove This Post. The setting here is Hexa, a fictional company that evaluates and moderates content for a major online platform. In 2017, The Guardian published an article on the criteria used by Facebook to delete online posts and the burden that this work places on moderators. This is where Bervoets’ story comes in: using impressively unfazed language, it shows a world of disturbing images, human abysses and inhumane working conditions. In the middle of it all is Kayleigh, a young woman who is not so much disturbed by the horrific videos and photos she sees, but rather the behavior of her colleagues. The boundaries of the virtual and analog worlds blur, and Kayleigh gets so lost in the moment that she doesn’t notice that she is getting carried away by conspiracy narratives.

We Had To Remove This Post by Hanna Bervoets (Hanser Berlin, 112 pages) 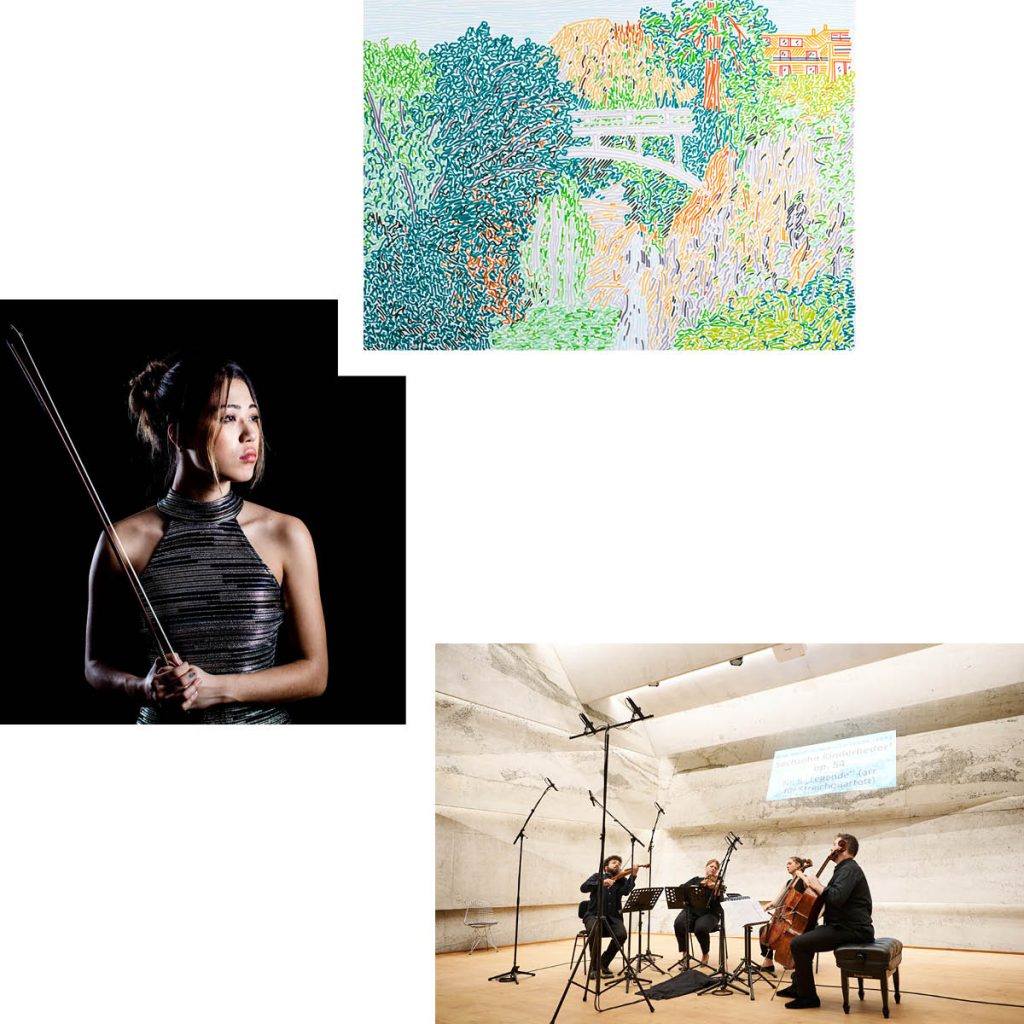 Classical music festivals are always trying to attract younger audiences – often with mixed results. This Berlin project could have better chances: Ins Offene..! Musik Festival 2.0., a program hoping to get youngsters excited about classical music. Putting “2.0” in the title may sound hackneyed, but it’s not just an empty phrase. The program is very much switched-on, offering the likes of seminars on social media marketing. This year’s line-up also includes a master class and a symposium. The evening concerts, meanwhile, let audiences discover new musical territories: classical genre boundaries will be crossed with artists, dancers and DJs performing together. The theme is “Dreams”, and there’s a willingness to experiment and show how diverse classical music can be.

Festival director Nikolaus Rexroth has included young talents as well as a Ukrainian legend: Valentin Silvestrov, the 85-year-old artist who made a name for himself as a master of silence. Silvestrov has lived in Berlin since the outbreak of the war. A performance by Greek dancer Emmanouela Dolianiti is particularly worth seeing, as are concerts featuring Casals, Ysaye, Ginastera and Cruixent. The music continues until this Sunday (29.01.2023).

Christine Scheucher is a cultural journalist and podcast producer at Austrian public broadcaster ORF. She hosts numerous cultural programs and is always traveling around Europe’s cultural hotspots, including her favorites on the Côte d’Azur and in Berlin.

Ins Offene..! – Musik Festival 2.0. Tickets for the festival and individual performances are available online or at the box office. 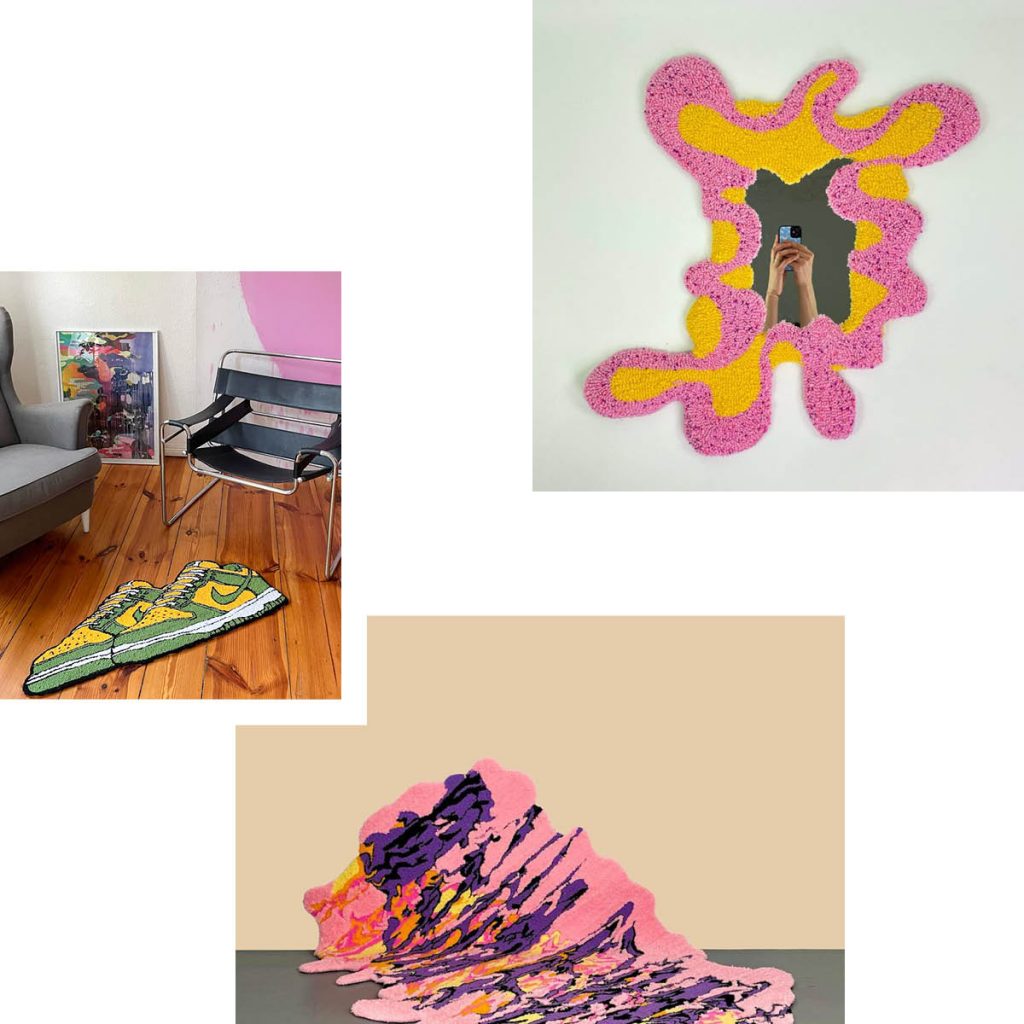 The hashtags #knit and #crochet currently have over 280 million views on TikTok as a new home decor trend sweeps the DIY world: rug art. At the center of it are colorful, fluffy and bespoke rugs made from acrylic. Klara Pichler – aka Klara Croft – stumbled across her tufting gun online during the 2020 lockdown. Ever since she has been creating one-of-a-kind rugs in bright colors and unusual shapes. Suitable for floors and walls, they not only glam up your mirror selfies, but are the perfect solution if you’re lacking floor space. The kaleidoscopic designs of the Berlin-based Tyrolean, some of which are rather reminiscent of an LSD trip, are designed intuitively on her iPad and embody the same sense of tongue-in-cheek fun and self-expression that can be found in the social media posts of her friends. The finished designs are projected onto the fabric, and then the tufting begins à la paint-by-numbers as the wool is shot into the canvas with the tufting gun and then fixed with natural latex (the latter doubles as a non-slip film). Voilà: your fluffy, mood-boosting eye-catcher is ready, and it’s anything but normcore. 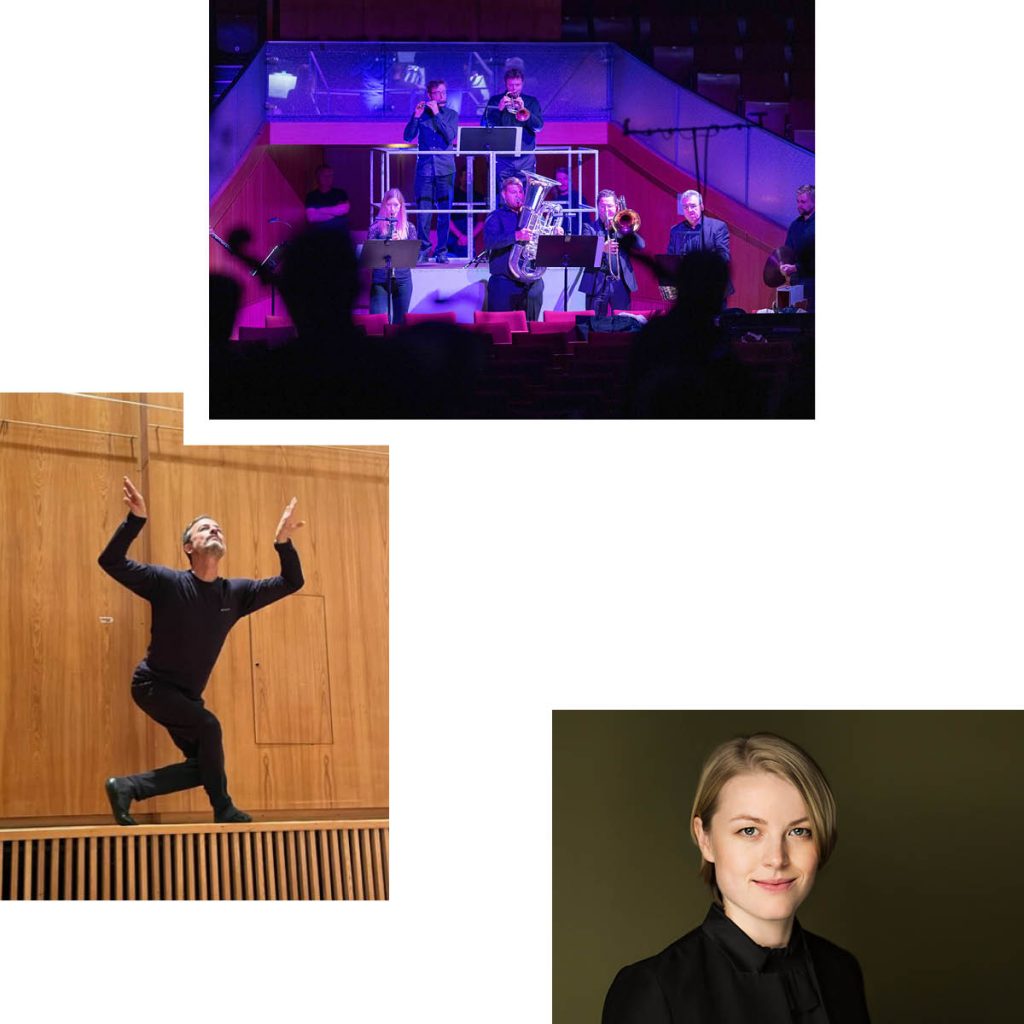 Questions about home, origin and identity are unifying elements of the composers and performers in the Haus des Rundfunks series Mensch, Musik!. Under the title “Heimkehr in die Fremde” (“Return to the Unknown”), conductor Ruth Reinhardt embarks on a musical journey in search of answers in pieces by Felix Mendelssohn Bartholdy, Bohuslav Martinů, Ursula Mamlok, George Walker and Dai Fujikura. These will be juxtaposed with extraordinary electronic sounds by British composer Richard Scott. There are surprises in store: Aribert Reimann’s disturbing arrangement of the Mendelssohn-Heine piece is performed by acclaimed countertenor Philipp Mathmann, while Mendelssohn’s title piece is paired with movement by Colombian dancer and choreographer Gustavo Llano. Finally, actress and speaker Inka Löwendorf adds spoken texts on the theme of homecoming and foreignness. The result is a multiperspectival, diverse evening with striking sound design. And what ensemble would be better suited for this than the Rundfunk-Sinfonieorchester Berlin, an orchestra which for a century has played in the architecturally unique halls of the Haus des Rundfunks, a listed building. With new beginnings meeting musical heritage, the audience is in for a fantastic night.