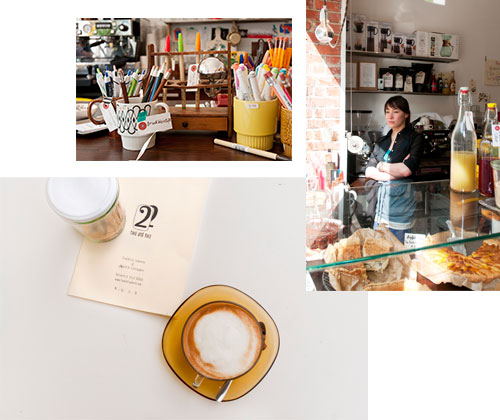 Eri hails from Japan and Tose is of mixed French and Japanese descent. The two girls have teamed up to open up a French bakery café in Berlin. Well the French know how to feast, and the Japanese are known for their precision – combine the two and you’ve got yourself a dream team to bring all your French pastry dreams come true! You’ll find a wide variety of delicious sweets, like tarts and patisseries, all made with love. The madeleines here are the best I’ve ever had; makes me want to read Marcel Proust again. But true to its name “Two And Two”, there is more to this petite café: they also offer Japanese stationary goods. United Bees’ canvas pen cases made with traditional Japanese machines, pens by Tombow, and little helpers by Ohto, Penco and Delfonics add to the fun. The Japanese, just like the Germans, love stationary. In a city where sitting at a café working on the computer (aka creative project) is the best cliché, selling them next to cakes and coffee is not such a bad idea. (Text: Nina Trippel / Photos: Rachel Israela) Two And Two, Pannierstr.6, 12047 Berlin-Neukölln; map daily 10-18.30h