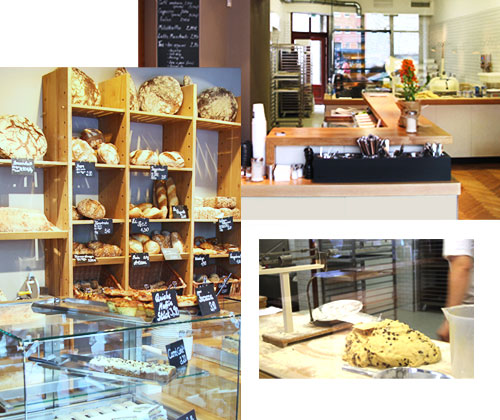 Have you ever watched a baker at work? The organic bakery “Zeit für Brot” is divided into two parts, shop/café and kitchen behind the window, so you can watch them in action. Since it is becoming more and more rare to find bakeries that make breads and sweets from scratch, this relatively new branch by a Frankfurt-based bakery is welcomed here in Berlin. They offer a wide variety of baked goods, from white breads such as the olive ciabatta to heavy wholegrain loafs and everything in between – like the Swiss dark flour bread which is hard to find in Germany. Fresh Laugenbrezel is also available as well as cakes, quiches and more. So don’t be fooled; Zeit für Brot may look like a café but first and foremost it’s a bakery with artisan bakers. Björn, the owner of the shop, recommended me to try their “Zimtschnecke” and it did not disappoint – lovely, juicy, very yummy and definitely worth coming back!