As soon as you enter the Konträr, you feel a sort of deceleration: this is a place for taking your time. Combining wine bar and restaurant, the Prenzlauer Berg spot was founded by Charlottenburger Taran Schiffer and chef Pablo Gomez. The pair have pedigree: they trained at The Culinary Institute of America and worked at New York’s Contra restaurant and Wildair wine bar under chefs Jeremiah Stone and Fabiàn von Hauske Valtierra (the name Konträr is a portmanteau of their former kitchen employers). Located in the Winsviertel neighborhood, the restaurant (bar) serves an excellent combination of interesting natural wines and down-to-earth fusion dishes inspired by the food the duo encountered while traveling in Latin America. Their approach is intuitive: ingredients are picked based on what “feels” right, seasonality permitting, of course.

Taran chooses exactly the right wine for the evening – and for you. He picks with as much precision as Pablo puts into his sharing plates. We ordered the Rockefeller scallops, a plate of radicchio, some white asparagus with beurre blanc and – the highlight – octopus with roasted potatoes, chipotle jam and aioli. The wine recommendation was a 700 series cuvee from Jacquesson, one of the oldest champagne houses in France. Briefly put: it made us want to stick around. Combining spontaneity and lightness, Konträr is as happy a culinary hangout as you can think of.

Michaela worked in publishing and architectural communication in New York before joining Cee Cee in 2015. She is currently studying a master’s degree in architecture, mobility and creative urban development. 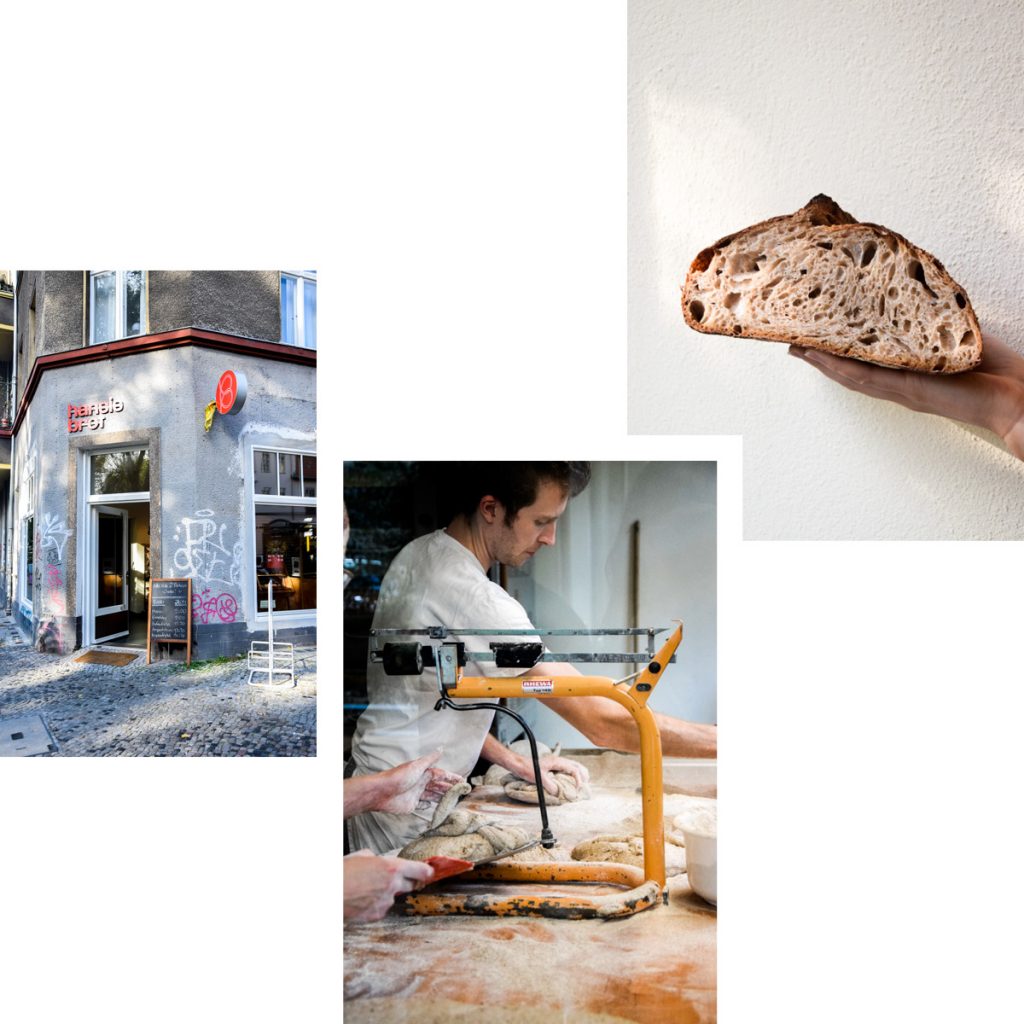 Johannes Jungnickel is 31 years young and a native Berliner. In 2021, he opened his own bakery in Sprengelkiez: Hansi’s Brot. It’s a very down-to-earth shop of the sort you might know from traditional German baking, selling sourdough bread and classic bakes. In the morning, the bakery is full of the smell of fresh loaves, rolls, pretzels, Dinkelseelen and Schusterjungs – all made with organic flour from Spreewald. Johannes is an artsy type who studied jazz guitar in Amsterdam. Unable to find any tasty bread there, he started a baking apprenticeship at Berlin’s Beumer & Lutum before working at Albatross Bakery for two years and finally getting his diploma that would allow him to open his own shop. Wedding is the ideal location because it reminds Johannes of the Berlin of his childhood. “It’s just nice here,” he says. Johannes is now keen to pass on his knowledge: Hansi’s Brot also trains apprentices. As for my favorite treat? It’s got to be the Himbeer-Kringel with raspberry. It alone is worth the trip to Wedding.

Lioba Leickel and Miriam Buholzer opened the small neighborhood shop Kiosk Sardelle right next to Hansi’s Bread in February 2021. They enjoy being next to their busy baker neighbors. 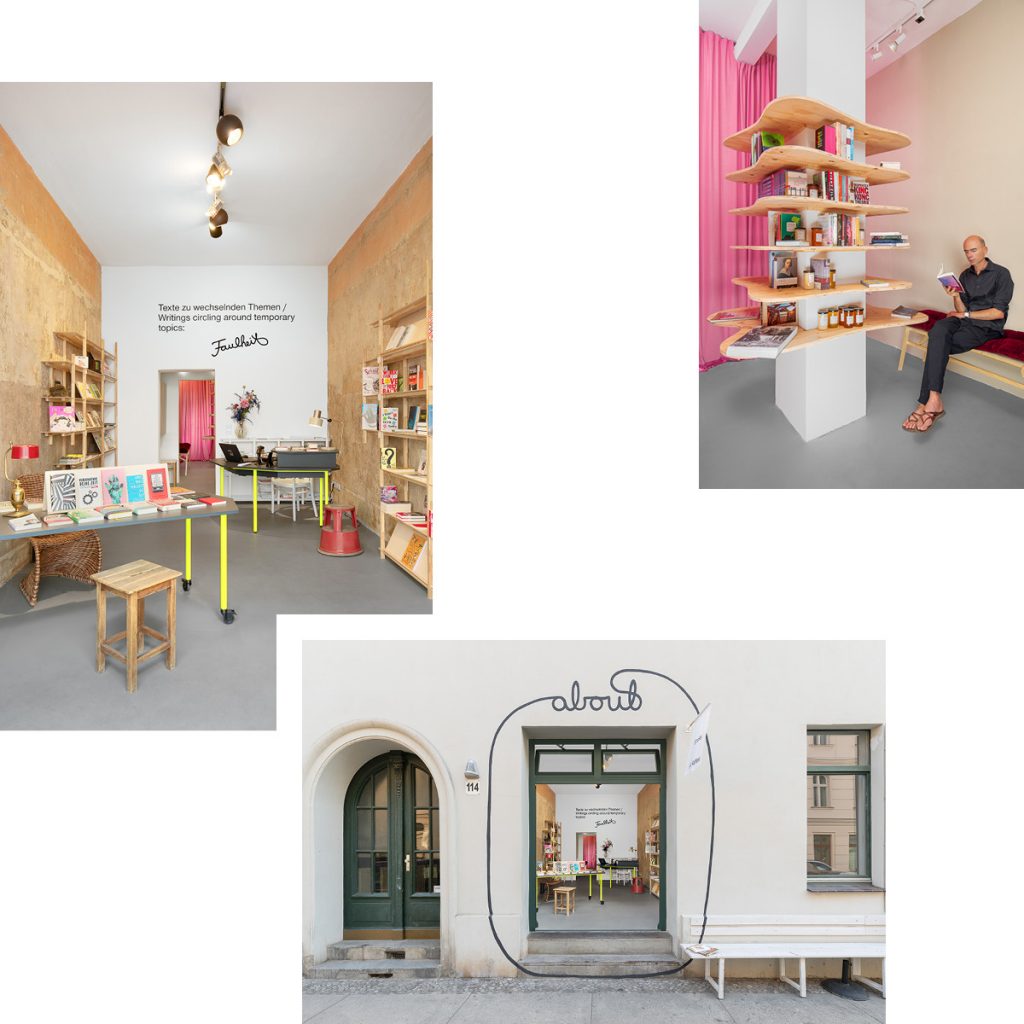 MANY BOOKS, ONE TOPIC: ABOUT BOOKSHOP — RECOMMENDED BY THOMAS FISCHER

What happens when an art historian-turned-curator opens a bookshop? That’s just what Gesine Tosin has done with About, a shop of curated books on Linienstraße. The concept of the store is unique: Tosin, who has worked for various art collections, picks books on a single, specific topic. The current selection includes novels, essays, art books and children’s books all dealing with the topic of laziness and idleness. Top picks include “How to Do Nothing” by Jenny Odell, “Waste Your Time” by Julian Pörksen and “Mr. Lazy” from the Mr Men series. “Aus dem Leben eines Taugenichts” by Joseph von Eichendorff is not to be missed. It’s refreshing and surprising to see how the focus on a single subject can widen your view and let you (re)discover unexpected works like Mr. Lazy. The shop is also a place to linger: you can enjoy a coffee there or attend book presentations and talks on the topic of the moment. It’s worth coming regularly, since there’s a new theme every three months. Next up from mid-October: friendship

Thomas Fischer is a Berlin gallery owner. Since 2011, he has been showing artists such as Irmel Kamp, Sebastian Stumpf and Noi Fuhrer. His gallery moved to Mulackstraße in Mitte a year ago. 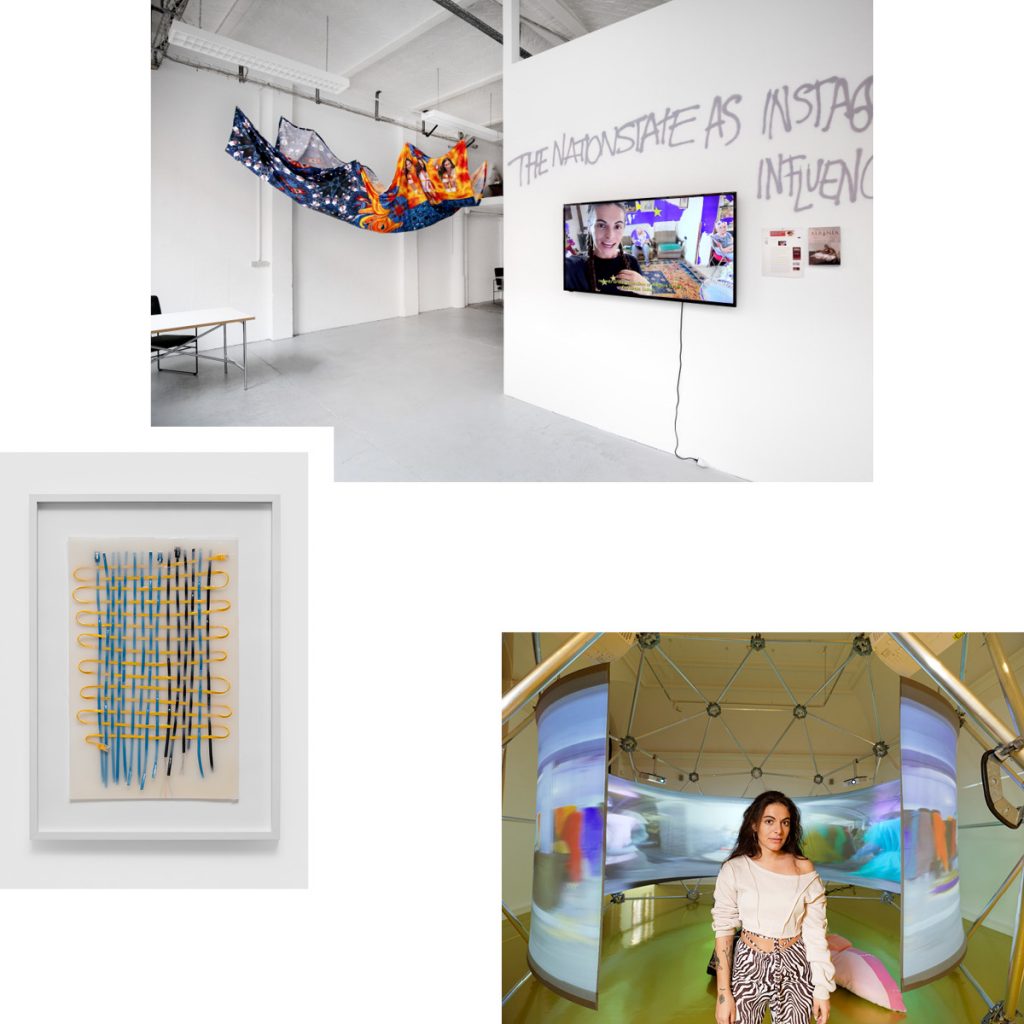 A GLITCH IN THE CLOUD: ANNA EHRENSTEIN AT OFFICE IMPART — RECOMMENDED BY JIL GIELESSEN

Turn off your laptop, put away your mobile phone and enter the real virtual space: tonight (15.09.2022) Anna Ehrenstein is opening her first solo exhibition, “The Balkanization of the Cloud”, at Office Impact gallery in Moabit’s Arminiuskiez. Ehrenstein leads us into a decentralized digital world where utopian promises of a global cloud have given way to disillusionment with totalitarian technology. Nation states become social media influencers in their quest for (geo)political influence, as the three-part video work “The Nationstate as Instagram Influencer” shows. Ehrenstein’s work – colored by her Albanian upbringing – is juxtaposed with that of Brazilian artist Lux Venerea and Israeli video artist Jonathan Omer Mizrahi. Ehrenstein and her Albanian grandfather satirically invoke ideas of white supremacy as a way to prove that the country is “civilized” enough to join the EU.

Mizrahi, meanwhile, travels to the occupied West Bank as a vlogger. His handheld camera footage shows a state-sponsored organic vineyard and an artist residency marketed by the Israeli government to distract from the violence perpetrated against Palestinians. Venerea, on the other hand, turns Jair Bolsonaro’s online provocation on its head, contriving pro-worker and LGBT+ propaganda in an exaggerated manner. Nationalist psyop narratives aside, Ehrenstein’s criticism is on point, and shows how virtual networking can be emancipatory. We won’t reveal any more here: you’ll have to explore Ehrenstein’s immersive space yourself. “The Balkanization of the Cloud” is a politically explosive exhibition that remains accessible and includes comic relief. The artist skilfully links ideas around the fragmentation of the web, the inner-European position of the Balkans and the instrumentalization of social media. Worth it, therefore, to swap virtual reality for some “real virtuality” at Office Impact.

Jil Gieleßen loves memes, hiking, and uncanny valleys. When she’s not writing about art, Gieleßen works at the Boros Collection and as an artist herself in Berlin. In December, her first solo exhibition on social media will open at Gold+Beton in Cologne. 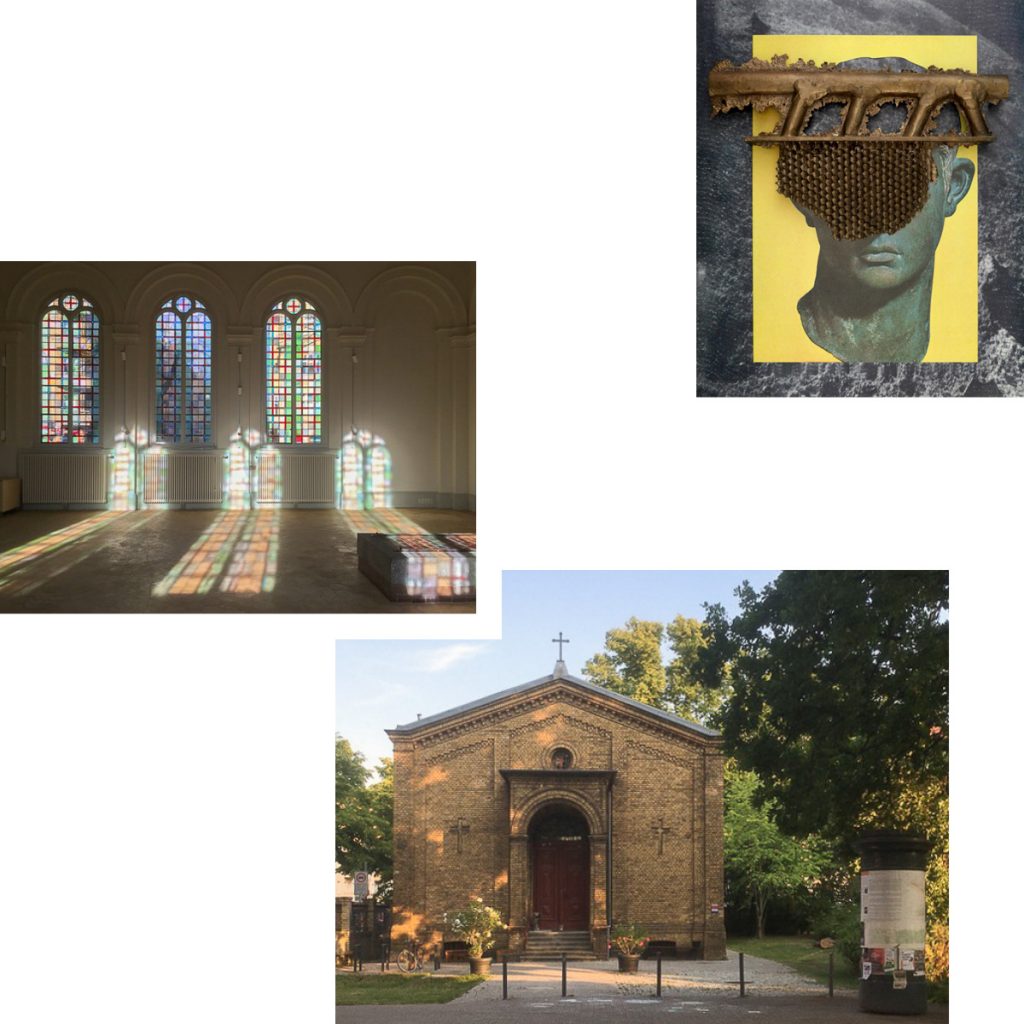 The Berlin-based artist duo Leonid Keller will be showing new works in the Kiezkapelle at the St. Jacobi-Friedhof in Neukölln from Sept 14-18, 2022. The exhibit, “Kings, Queens, and Other States of Mind,” merges different media into a spatial installation in the former funeral chapel. The show revolves around re-imagined visual worlds that describe the humanist ideal and, by combining image and object, addresses societal issues and challenges that arise from a post-anthropocentric worldview. The exhibition draws on visual quotations from ancient Greece, considered the birthplace of humanism. Leonid Keller allows this imagery, anchored in our collective visual memory, to meet contemporary historical images of society, power and spirituality. Combining bronze and concrete sculptures with non-human elements from nature, Leonid Keller challenges us to see the human in relation to the non-human and to think of the two as inextricably linked. In their works, the artists use primarily documentary material from magazines, textbooks and photography books. They rearrange this material into fictitious constellations of image, text, form, color and object. As a result, they dissolve the historical and temporal bonds that bind them and  new narratives emerge. Leonid Keller is concerned with the development of imagery that creates a new approach to prevailing points of view.

Nathalie Hoyos is a freelance curator. In 2010, she and Rainald Schumacher co-founded office for art in Berlin. Currently on view are the exhibitions ‘How to Deal with the World’ at Wilhelm Hallen as part of Berlin Art Week and My Body is a Battlefield – Maria Kulikovska at FC – Francisco Carolinum in Linz.