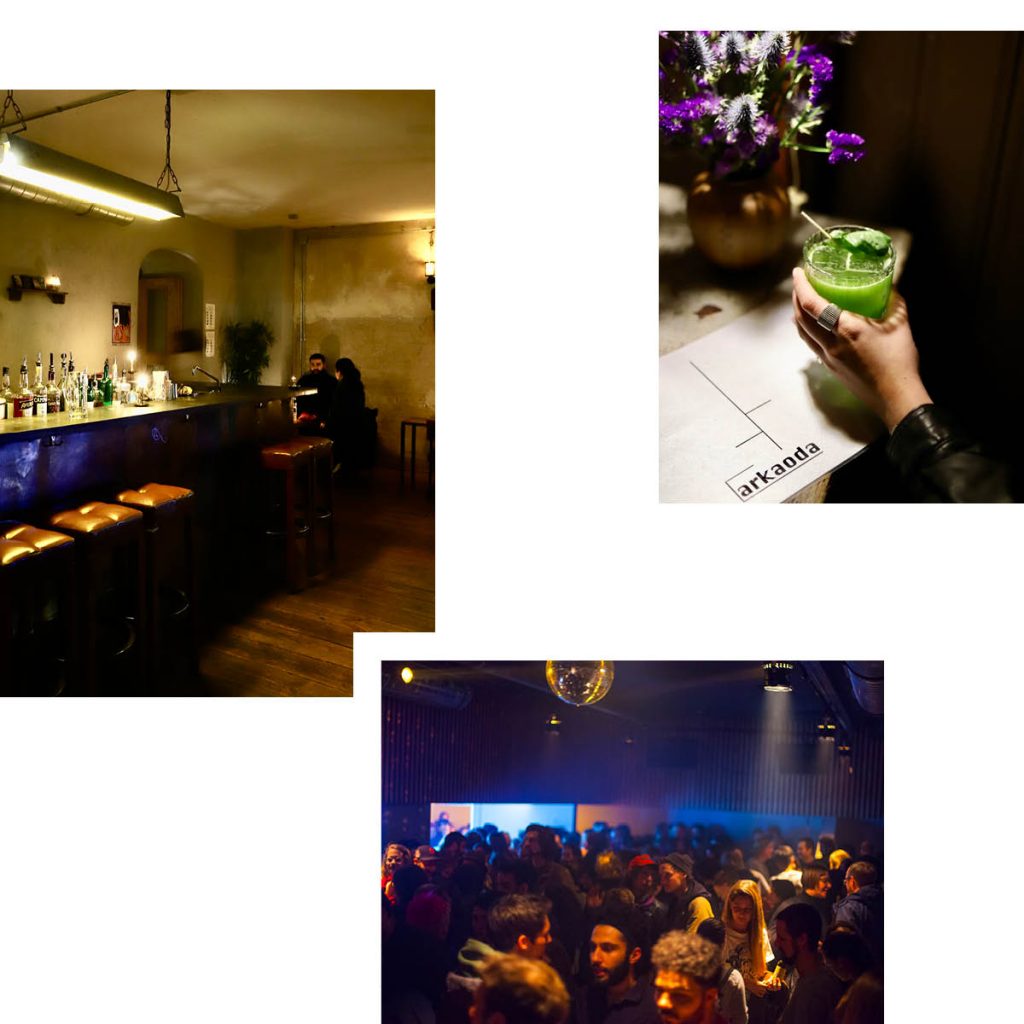 ARKAODA: THE PERFECT MIX OF BAR AND SMALL CLUB AT RICHARDPLATZ-KIEZ

Berlin is full of places for a good night out – not least if you’re after a bar that isn’t just about cozy seating, wood-paneled walls and pool tables (though we’re a sucker for those, too). One venue taking the funky bar concept to a whole new level is multifunctional Arkaoda. As you stroll across Karl-Marx Platz,the glass frontage exposing intimate candlelit tables and muted walls might catch your eye. Thoughtfully arranged, the bar’s seating is perfect for a date night or catching up with your pals while actually being able to hear what they say. Had a few beverages (our go-to is the Gin Basil Smash or Pisco sour)? Great. It’s now time to head down some chic stairs to the even chicer basement designed by Studio SPC for perfectly-calibrated acoustics. That’s where Arkaoda has a trick up its sleeve: a multipurpose event space home to a rich program of concerts, live sets and parties – see their calendar for upcoming events. Oh, and if you’re paying a visit to Istanbul anytime soon, the sister venue there looks equally inviting and features a consistently great lineup. Back in Berlin, this Saturday (02.04.2022) sees Refuge Worldwide’s takeover in “Neighbourhood Dance” on both floors of Arkaoda from 22h. 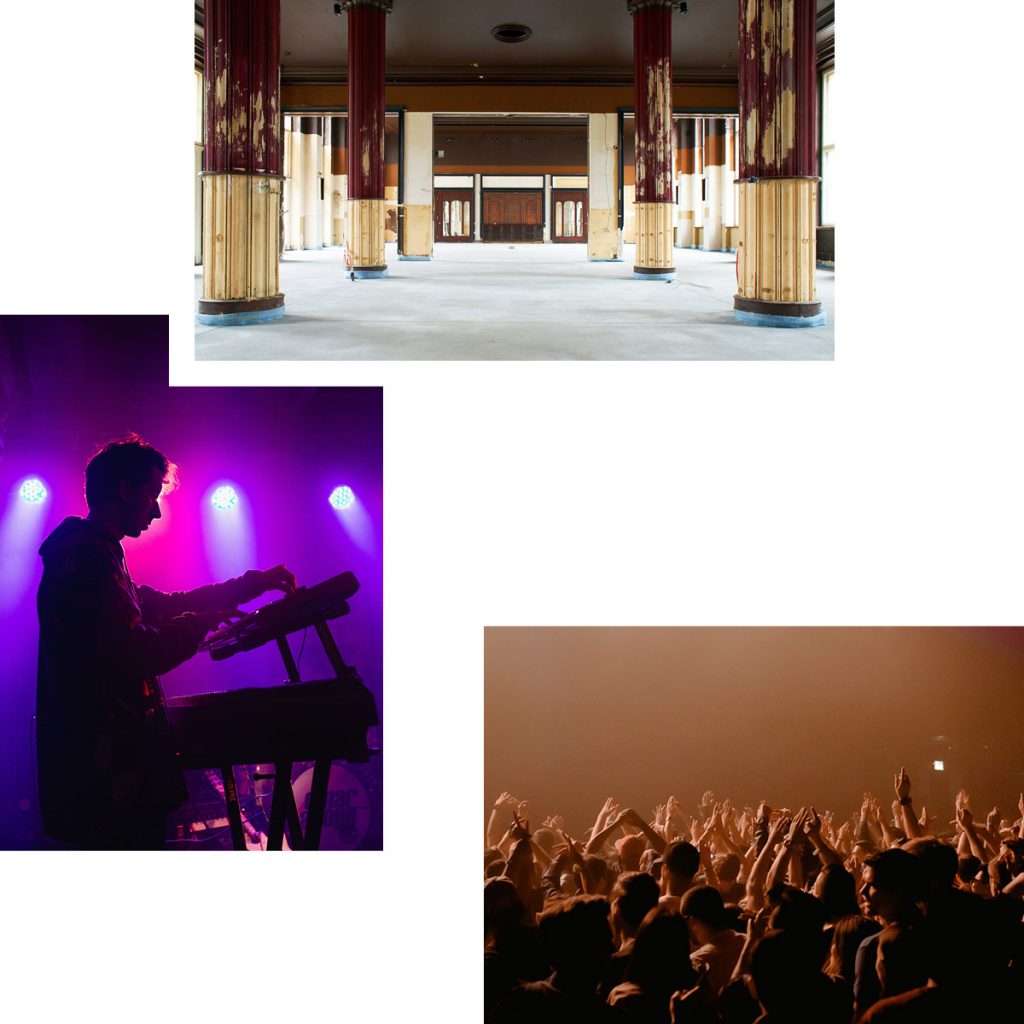 With the opening of Zenner in June 2021, a historic but neglected site in Treptower Park was brought back to life as a trendy place to dine and drink on the river. Now, the Spreeside retreat is reviving its centerpiece: the previously derelict Zenner Haus. The GDR-era venue – complete with peeling walls and retro windows – will host a summer program of concerts, club nights and cultural events, allowing guests to watch, dance and drink in the iconic building. The lineup includes celebrated artists and collectives from Berlin and beyond, continuing on 06.04.2022 with an evening with author Michael Nast, who became the voice of Germany’s young people with his 2016 bestseller “Generation Beziehungsunfähig”.

If it’s a party you’re looking for, on 09.04. the space will welcome the latest edition of Buttons, the queer club night that, since its founding as Homopatik more than a decade ago, has achieved legendary status on the Berlin scene. Also celebrated – not just in Berlin but all over the world – is composer and musician Roger Eno, who will fill the hall of Zenner Haus with music from his latest album, “The Turning Year” on 12.05. If the cultural program is a reason to visit Zenner, you’ll want to stick around for the other highlight: a craft beer in the delightful riverside beer garden. Sounds like summer to us. 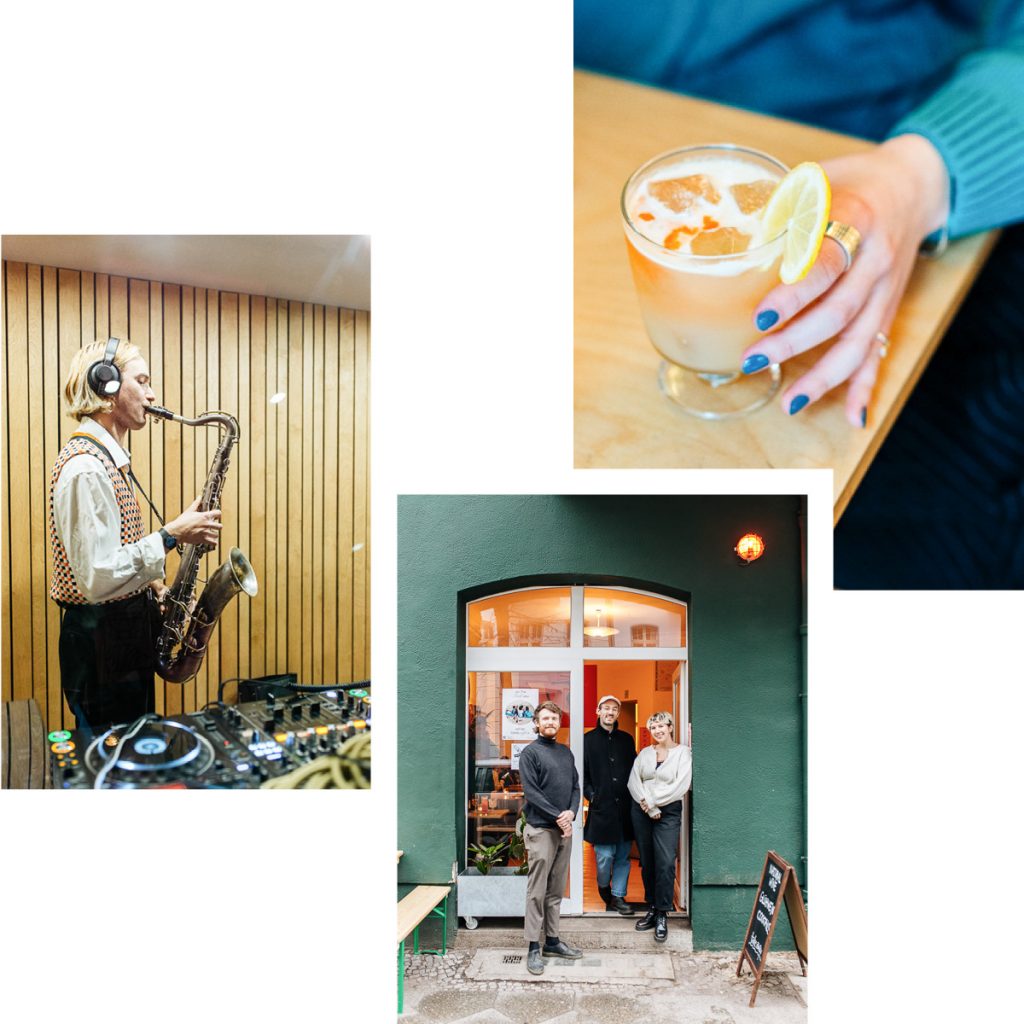 Neukölln-based radio station Refuge Worldwide has been on our radar since it hit Berlin (and the world’s) airwaves in spring 2021. As well as growing online listenership, the station’s presenters and DJs now have another audience: the guests and regulars at Oona, Refuge’s very own in-studio bar at their home on Weserstr. Located in the front part of the studio space, the bar is a place to listen to the station’s programming right where it’s being broadcast. The interior itself is a simple, relaxed affair: its standout feature is a groovy chrome bar area that comes courtesy of designers at ErtlundZull(who are also responsible for the kitchen and lighting in one of our favorite bakeries). The bar is as well-suited for afternoon meetups as late night drinks dates, stocking a great selection of organic orange wines and cocktails including a vegan whiskey sour made with aquafaba. You can hang out at one of the intimate tables or pay a visit to the back room where you can get a glimpse of the live studio and booth designed by DJ Christopher Hreno. (read more)

Besides broadcasting everything from Afrofunk to modern British electronica, the studio also serves as a workshop space that offers free sessions on music production (with priority given to marginalized groups), voice embodiment and sound healing sessions and even the odd spoken word night. Far more than just a drinking venue, Oona feels like a community hub where all sorts of people from Neukölln and beyond come together. Indeed, the idea for the bar was inspired by a child who frequently visits the space, much to the delight of the regulars. The child’s name: Oona. 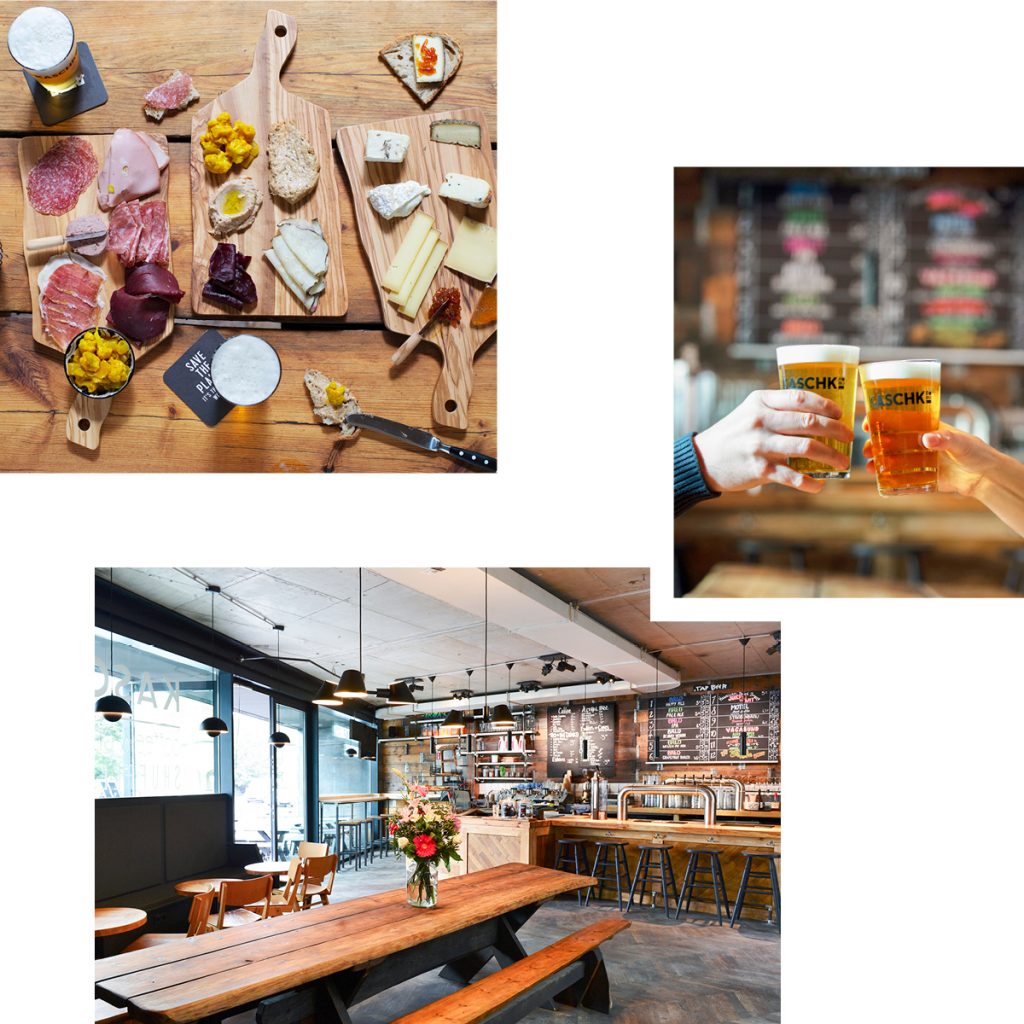 “Sometimes what belongs together comes together,” says Ben Pommer of the reopening of Kaschk. Known for its fine coffee, Scandinavian beers and shuffleboard, the bar now has “by Brlo” tacked onto its name after a takeover by the Berlin master brewers. Some things have remained the same, like the focus on beer: there are 12 varieties on tap, many of them now Brlo brews. My favorite is the Happy Pils, a delicately malty beer that retains a distinct bitterness. But the biggest change is to be found on the menu. As head of gastro at Brlo’s Brwhouse headquarters, Pommer has put vegetables at the forefront, whether fermented, pickled, smoked, or cooked in salt. Now he has “Brloized” Kaschk, meaning there are lots of nice things to accompany your beer with: nuts with Brlo’s BBQ rub, olives cooked with rosemary, thyme and and lemon-orange zest plus a delicious toasted flosame sandwich with mortadella and pistachio cream. The signature dish, however, is the vegan butcher’s plate. It includes beetroot baked in salt dough which is served in wafer-thin bresaola slices and tastes juicy, salty and sweet at the same time. Other highlights include a jackfruit rillette with sweet brandy and vegetarian stock, hay-smoked celery, and a pumpkin parfait that’s far more exciting than the typical vegan pastes. For the carnivores there’s also a non-vegan snack board with cheeses from Fritz Blomeyer and cooked meats from Biomanufaktur Havelland. The accompanying bread comes from the neighboring Zeit für Brot bakery. That said, I would make the trip for the jackfruit rillette alone – not to mention the beer. As for Pommer, he prefers to drink kombucha. To find out why, listen to the latest episode of the Teller Stories podcast where we also reveal how to pronounce the name Brlo correctly… 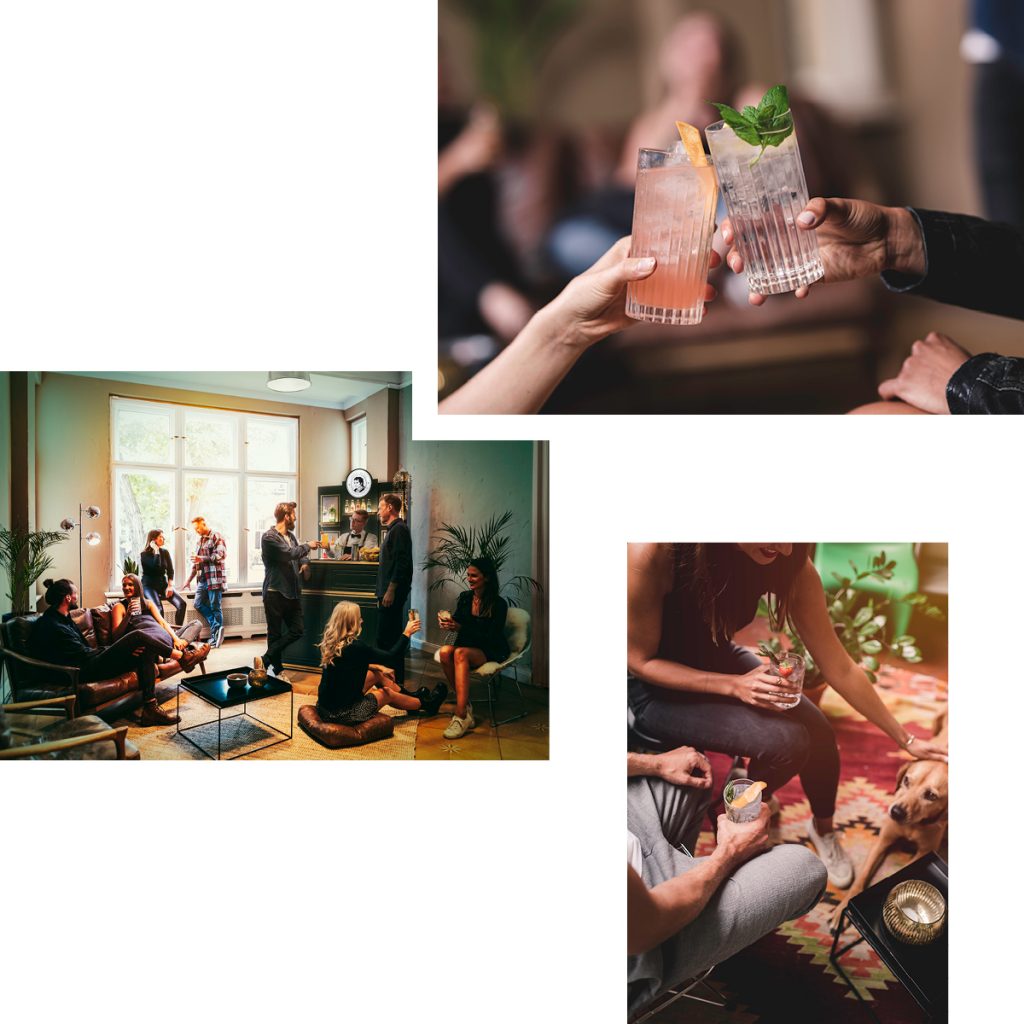 The candles are lit, the canapés are ready and the guests are arriving. But who’s taking care of the drinks? If you are the kind of person who likes to get some help and expertise hosting, why not leave the bar to the folks who actually make the mixers: Thomas Henry. Since summer 2021, the Berlin drinks company has been bringing their mixing expertise into homes and event spaces with Die Bar, a mobile station for tasty drinks. The all-inclusive package can be booked for any event, from garden parties to company celebrations, and is run by a professional bartender, who knows how to blend, shake, stir and, yes, mix it all. There are three packages to choose from, all with alcoholic and non-alcoholic drinks. The “Gin & Tonic” is, as the name suggests, dedicated to this classic and comes with five different gins and four tonics. The “Longdrink” menu spices things up by adding the likes of Horse’s Necks and Moscow Mules. For everyone who enjoys lighter drinks: there’s the “Aperitivo”, which serves up Berry Breezes and Rosé & Tonic perfect for any balcony moments or rooftop soirées. Your guests get to indulge in an expertly mixed drink or two but most importantly: you get to relax and spend some quality time with your favorite people. That’s what parties are for, right?

You can reserve Die Bar by sending details of your event, the number of guests and the desired date via the form online.