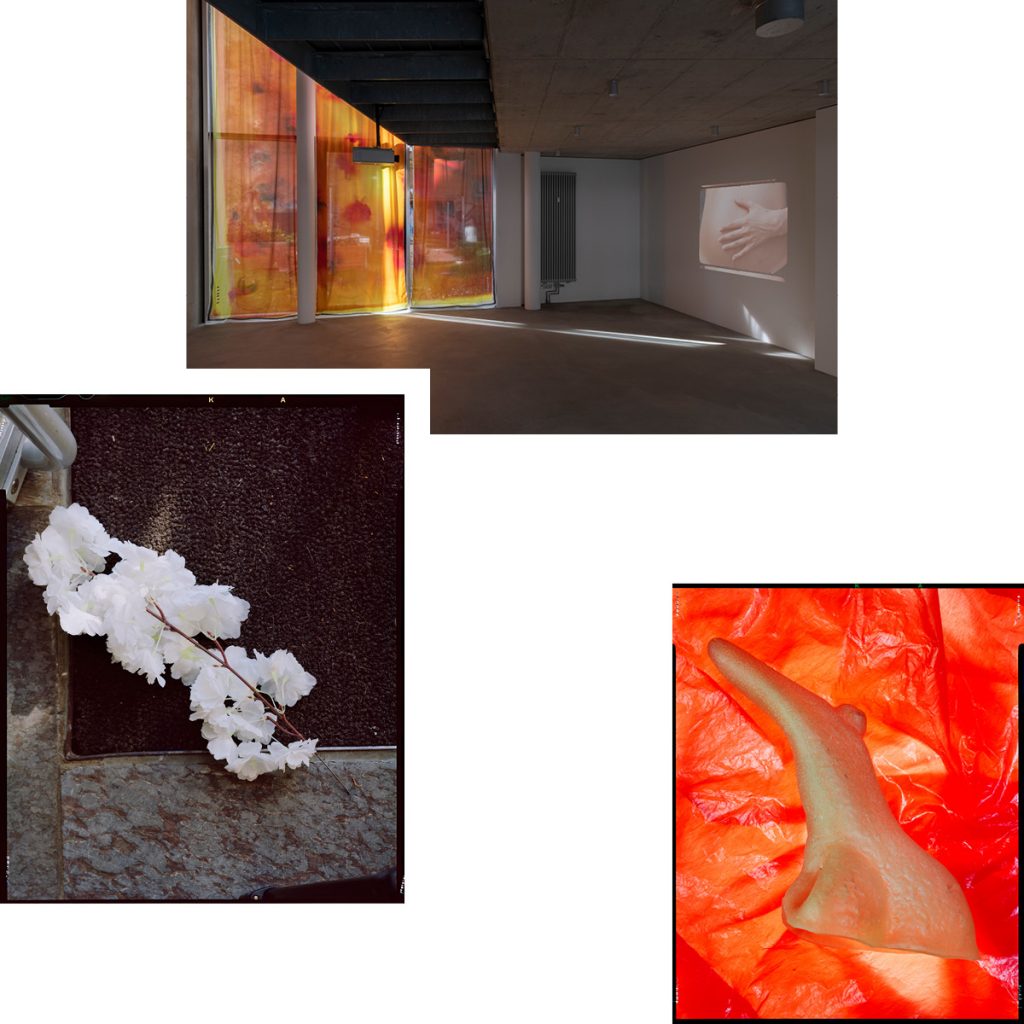 Georgian-American artist Ketuta Alexi-Meskhishvili’s exhibition begins on the street: her printed, transparent curtains cover the window front of Galerie Molitor – which opened in autumn 2022 – like a bluish veil. The winter sky combines with Alexi-Meskhishvili’s airy compositions in a blend of inside and outside, reality and image. The interplay lures you into the space – an ensemble of glass buildings designed by architects Johanna Meyer-Grohbrügge and Sam Chermayeff. Born in Tbilisi in 1979 and raised in the USA, Alexi-Meskhishvili spent her childhood in theaters, where her father worked as a set and costume designer. This work – with its raised floors and layered backdrops – still interests her today. Alexi-Meskhishvili’s delicate photographs draw on permeability both in the image and the medium: sometimes you recognize a flower-filled street or the silhouette of a woman, other times you see only abstraction. The photographer deliberately scratches and overexposes her images when she scans them, and manipulates the surface of the negative film itself. These imperfections give the works a pulsating, beguiling beauty.

In addition to photographs, Alexi-Meskhishvili is also showing her first film,”Flush”, which lends the exhibition its name. In it, she mixes iPhone footage with 16mm film in which you see the hands of a sculptor next to a pregnant woman and a girl’s hair bleached by vitiligo. These images summon silence: an exploration of the gaps in between. For gallery owner Marie-Christine Molitor, it’s a strong opening. The exhibition sets the tone for what is to come – and Molitor has lots planned. After ten years at Galerie Neu, she opened her gallery in Autumn 2022. “The program of the gallery has a strong focus on collectivity, collaboration, diversity, sustainability, openness and working ethically and digitally,” Molitor says. How serious she is about these promises is made clear with her collaboration with New York-based artist Dora Budor – and her next group exhibition. Opening 09.12.2022, it will give participating artists a share of the show’s profits, in a kind of employee partnership. It’s an important step towards better working conditions in an industry that makes millions but where fair pay is far from the norm.